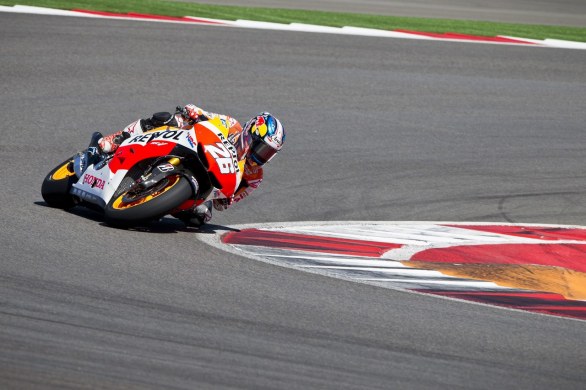 Factory Yamaha and Honda riders today got their first taste of the tough and demanding Circuit of the Americas track in Austin Texas.

The aim for the first day was  to learn the new circuit and its layout and adjusting to the lack of grip and the rising temperatures.

Battling a nasty crosswind was the first challenge the riders faced, and there wasn’t too much impetus on who posted the fastest lap, but it doesn’t mean the riders weren’t all attempting to go fastest.

After Richard Stanboli’s warning that there would be lots of crashes for those who won’t be testing, it was somewhat ironic that the only crash of the day, and minutes into the day was his rider Blake Young who tumbled, causing an early red flag when his CRT Kawasaki caught fire.

But once the day restarted the fastest man on the first day of the test was MotoGP rookie Marc Marquez. The Spaniard got the hang of the circuit before the rest of the riders, and in his carefree style stormed to the top of the time sheets early, and spent the day there, other than for a brief period which his team mate went quicker.

However Marquez was able to go quicker, and ended up with a fastest lap of 2.04.619. “The first day in Austin went pretty well,” said Marquez.

“It is a fun circuit, because there’s not a single bump on the track. There was no grip at the start and we were sliding around a lot, but gradually the lines were cleaned up and we could tackle it better. In the first part of the track, where the flowing chicanes are all linked up, it is a very tricky section.

“It is a physically demanding part of the circuit where you have to use a lot of strength to change direction quickly. It is definitely a key point of the track.

“There are three right-handers later on, all linked together, making it hard to find the ideal line. We are finding our way steadily though.Today was all about learning those lines, rather than trying out too many things with the bike. Tomorrow we will start to adapt the gearing and the electronics, as we have a lot of work ahead of us.”

Second fastest was the second Repsol Honda, and the 2012 runner up Dani Pedrosa. Pedrosa ended the day almost five tenths adrift of his team mate, although Pedrosa wasn’t focused on lap times, and just wanted to help find a good set up on the first day.

“It is a new circuit -and a very different one at that,” Pedrosa said.

“This makes it important to put in plenty of laps, to get your reference points established: Braking markers, gear changes, finding out whether you are best off in second or third gear – things like that.

“It was good to ride a lot of laps today, and also to see how the tyres faired. The track has a lot of tight corners -above all Turn 1- but there are also flowing chicanes and some long straights. The pace and direction changes from section to section, which is a little strange at first.

“However, after so many laps, you get the hang of the track. Even if the grip levels aren’t especially good, the overall feeling is positive.”

Third fastest was the defending world champion Jorge Lorenzo. Despite being the best part of sixth tenths behind Marquez, the two time world champion was happy with his first day at COTA.

Speaking after the day Lorenzo said, “In the beginning it was difficult to understand the lines but I have improved 3 seconds from the first lap today, that means it’s a hard track to learn and a difficult track to go to the maximum on. I think it helps more than some other places to have this extra time.I think three or four practices before the race will not be enough to understand it so some of the riders who didn’t come here will have a little disadvantage.

“The wind has been a little bit of a problem, especially on the longer straight where you arrive over 340km/h, you feel a lot of unstable feelings. Almost all the track is tricky, there’s some very hard braking and also tight hairpins. The first sector is flowing but it is very hard to find a good line because it’s blind.

“We’re getting used to the track but also trying to solve a problem at maximum lean where we don’t have full confidence. We have to change the setting a bit to make it better. The tarmac is not perfect with only four bikes on it to clean it so it’s difficult to understand if it’s very grippy or not.

“It’s hard to know if it will be much better at the race weekend or just a little bit.”

Stefan Bradl was fourth fastest, and spent most of the afternoon ahead of the Yamaha duo but eventually ended behind Lorenzo, with the German having his first taste of riding a factory RC213V (albeit in LCR colours)

“When I first saw the track and went around it, I thought it was quite difficult,” said the German rider. “We had really low grip and it was a bit cold, but the sun came out so we got proper track temperature and grip during the day. I think it’s a nice track.

“It was a bit difficult to find the right line at the beginning, but that’s quite normal and after a couple of laps I was able to go faster and faster and generally enjoy the track – it’s very nice, but not easy! The most difficult bit is definitely Turns 2, 3, 4 and 5, where you have to change direction many times and very quickly. You have to be very precise and make sure you enter that section on the right line; if you get it wrong, the lap is gone, so that is one of the most challenging parts.

“The first corner is very nice too: you can brake so late and it’s going uphill, so you almost start flying over it! I’m looking forward to racing here.”

The busiest rider of the day was Valentino Rossi. The Doctor posted more laps than anybody else on the first day at COTA, posting 68 laps, but he could only end the day in fifth position, alarmingly 1.9 seconds behind Marquez.

“My first impression is that it is beautiful. It’s very flowing with a lot of fast corners and direction changes – it’s fun on the bike! There are three hairpins that are very tight; that’s better for Formula 1 overtaking, but for us they are a bit slow. In general the track is good.

“The city is great and the atmosphere is very good, so I think it is a very good place for a race. It’s very important to have this time as the track is so difficult – there are a lot of blind corners where you have to understand where to brake. It’s important for MotoGP to have a third race in America; we have a lot of good riders from the USA, so it’s right to be here.”

The riders will be back on track tomorrow, although Yamaha are only doing the first two days, with Honda staying on till Thursday. The whole grid will be at COTA on 21st April when the circuit hosts the second round of the 2013 MotoGP championship.