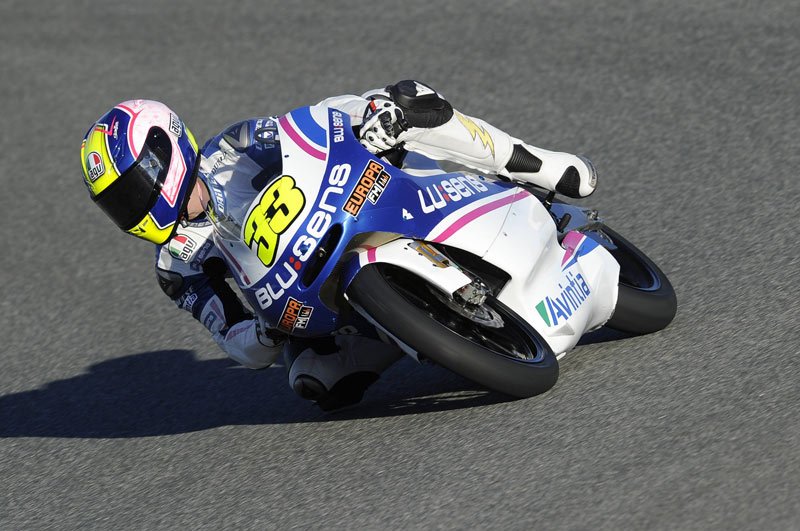 Early rumours suggesting Spainiard Sergio Gadea was to be replacing Tom Luthi on the Interwetten Suter whilst the Swiss recovers from his broken arm, have proven correct, as the teamtoday confirmed their signing of Gadea.

The was talk in some quaters that the team would be looking at the possibilty of missing the first two fly away races of the season in a effort to save on costs, but that has proven not to be the case.

The 28 year old Spaniard Gadea was forced to quit motorcycle racing when a lack of opportunities arose, but this is now a chance for him to restart his career with a race winning bike in the ultra comptitive field.

Interwetten team owner Daniel M. Epp said, “we are all very happy that Tom’s second operation was a success and that he continues his quick recovery. But it is still realistic to assume a rehabilitation period of two months, which is why we nominated Sergio Gadea as a replacement rider for the upcoming Jerez tests and, in all likelihood, for the first two races of the season as well.

“With three victories and a total of 18 podium finishes, Sergio proved that he is one of the top riders in Grand Prix racing. He deserves another chance. With Sergio in our team, Tom can go through his recovery program step by step and without time pressure. But of course, we and his bike are ready for him as soon as he is fit again!”

“To be able to return to the world championship with such a professional team and such a competitive bike is a fantastic opportunity for me,” said Gadea.

“Whilst I tried to keep in good shape throughout last year riding all kinds of different bikes, I was waiting for a chance like that. Times are tough in Spain, which made it very difficult to find financial support for this sport. I am even more delighted about this opportunity and I will pull all stops to deliver the best-possible results.

“The Suter MMX2 is the world championship-winning machine and speaks for itself, as do the victories and podium finishes that Tom and his team conquered with this bike. But miracles don’t exist in this sport and even though I have more than a year of experience in the Moto2 category, I can’t expect to be able to compete on the same high level straight after my comeback.

“But I am still confident, because I had good results at Jerez and Qatar in the past. During the Jerez tests, I will try to learn and understand as much as possible about the bike, then we will see where we are at in comparison to our rivals. I can’t wait to get on the bike!”