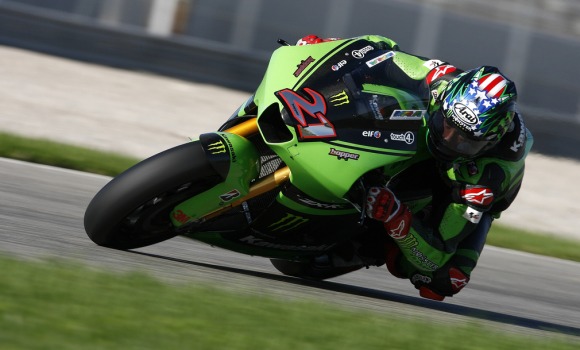 Could Kawasaki be the latest brand to rejoin the MotoGP grid for 2014? Well that is certainly the noises coming from John Cuzari, NGM Forward Racing team manager, who was speaking at his teams launch in Milan.

According to GPone, Cuzari was talking about the reasoning behind a two rider CRT effort for 2013, and the chances of a return of Kawasaki (the team are running Kawasaki engines in their FTR chassis).

The Forward Racing team originates from the Hayate team which Marco Melandri raced for in 2009 on the final Kawasaki MotoGP bike, so in a sense it was a “return home” in the words of Cuzari.

If Kawasaki were to return they would be looking at expanding a team, much like Suzuki are being instructed to do rather than just re-joining the paddock with a whole new team, meaning there is a possibility of Forward taking on the Kawasaki effort.

Cuzari also claims to have spoken to Ichiro Yoda, and he is said to be interested in the possibility.

Colin Edwards spoke at the back end of last season about his desire to have a M1 engine next season when Yamaha are realizing four engines to help improve the competitiveness of the grid, but either way it looks like exciting times ahead of NGM Forward Racing.