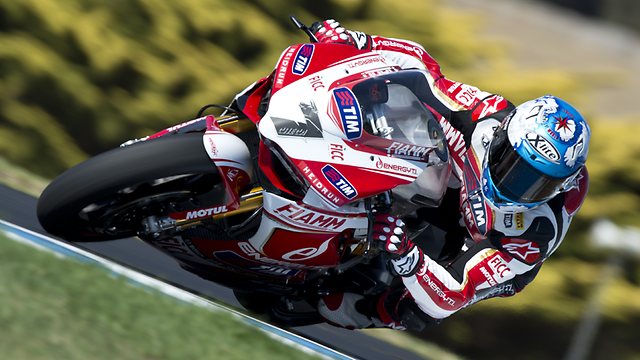 Perfect afternoon conditions saw Carlos Checa post the fastest time of the day on the final day of World Superbike testing at Phillip Island ahead of this weekends curtain raiser.

The day began under grey skies and a few drops of rain that left the track half and half, neither dry nor wet, but by the afternoon the conditions were perfect and allowed the riders to post faster lap times than yesterday, again leaving 11 riders all within a second of first place.

The fastest man of the day was Carlos Checa aboard his new Ducati 1199 Panigale.

The 2011 world champion was forced to sit out the two day private test last week due to an illness, but today made up for any lost time as he showed, despite lots of work seemingly required the Panigale is already a potential race winner.

Marco Melandri was in second place, just 0.178s behind that fastest lap of the day. This lap was posted despite Melandri still suffering heavily from shoulder issues which may prove costly Sunday, but there are ominous signs ahead for the rest of the field as Melandri looks set to launch another title challenge.

Tom Sykes moved back into more familar surroundings as he finished the day in third position as his hand injury was less trouble today. Sykes is unsure whether the injury will cause him trouble in the races, but his times  from today are encouraging for himself and the team.

Michel Fabrizio continues to impress aboard the Aprilia, and finished today as the leading Aprillia rider ahead of the factory duo of Guintoli and Laverty. Fabrizio, who has a good record at the season opener down under was just 0.291s behind Checa.

Pata Honda duo Jonathan Rea and Leon Haslam were 5th and 6th respectively,  with Rea two tenths faster than Haslam. Rea was happy with the progress made today, but insits there is still work to be done.

Althea Racing’s Davide Giugliano aboard his satellite Aprillia was also faster than the factory duo as he ended the day in seventh position, but he suffered a fall, although he was unharmed.

The factory Aprillia’s were next as Sylvain Guintoli and Eugene Laverty were eighth and ninth respectively as they worked on race set up and strategy for the weekend.

Jules Cluzel suffered another crash – his third in the past four test days – that took him out of action for the rest of the day, but his best lap still gave him the 11th spot on the time sheets.

Yesterday’s fastest man Leon Camier was the only rider who didn’t improve today, as he worked on race set up and strategy for the weekend. His time from yesterday still leaves him fourth fastest after the test.

Chaz Davies was 12th, and the first of the riders to be over a second behind Checa and he continues to learn the BMW machine.

Ayrton Badovini also today returned to action, but just for 8 laps, after his horror crash on Friday that sent him to the hospital. Despite being battered and bruised Badovini is expected to feature this weekend at the season opener.