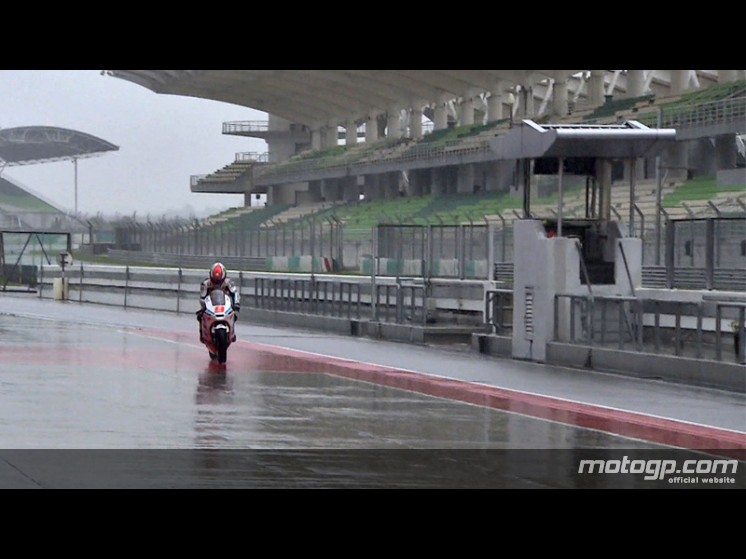 After glorious sunshine on Sunday, Monday was hit with stereotypical tropical rain during the second and final day of the ECU testing at Sepang for the three CRT teams who will be using the Magneti Marelli spec ECU.

Danilo Petrucci who put in the most laps yesterday on the IodaRacing’s Suter- BMW, but today he only managed four laps running again completely without electronic aids before suffering a technical glitch, and he also had to share his bike with team mate Lukas Pesek.

The team only brought two machines for the five day test, but not enough spare parts to run both bikes that still have the 2012 chassis.

Despite the numerous setbacks, and battles with the electrics  team mate Pesek was able to put in 19 laps today.

Avintia Blusens’ Hiroshi Aoyama rested his injured left wrist today, after yesterday deciding the pain was not worth the risk in the rain. Hector Barbera again suffered electric issues with his bike’s wiring loom that cut power, although he did manage 20 laps, the most of anybody today.

After missing out on the first day of testing because NGM Mobile Forward Racing had to assemble the bikes because parts were delivered late, Colin Edwards today completed seven laps, and team mate Claudio Corti suffered other issues on his FTR Kawasaki and managed only eight.

The Dorna plan to give two extra days testing, to gather important data for the new ECU has turned out to be a unfruitful one for the teams involved.

The teams have been left with numerous unresolved issues that will have to solved, at least partially, during the next three days of MotoGP testing, when all of the prototype machines make their 2013 debut on track.