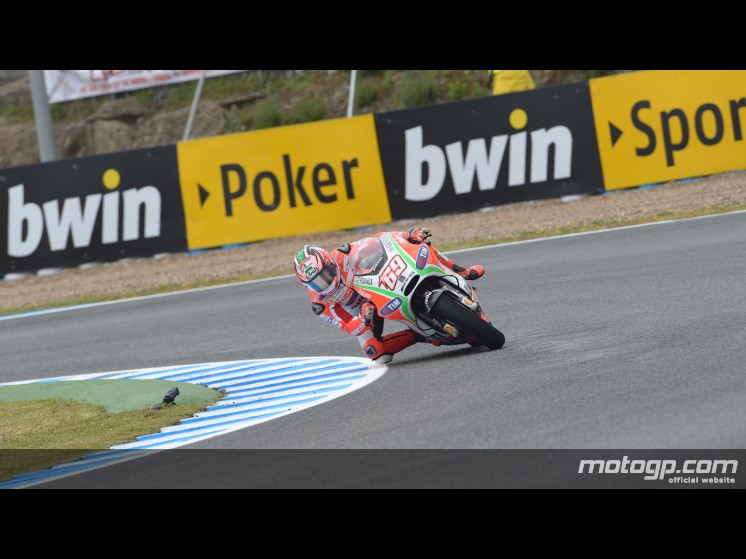 The Ducati team and the Avintia Blu:sens team have started a three day test at the Jerez circuit in Southern Spain today.

On a cool day in southern Spain it must have been a relief to both teams to be greeted by some dry weather after rain marred the Valencia test two weeks ago.

American Nicky Hayden didn’t waste any time in getting to work testing a whole host of parts that couldn’t be tested in Valencia due to the weather, including two different swing arms as Ducati look to start afresh post Rossi.

His new Italian team mate Andrea Dovizioso had planned to use the three day test as an opportunity to get to grips with the notoriously difficult Desmocidici, but he could only manage two laps before spending the rest of the day in a neck brace, although he is expected to be back in action tomorrow.

The factory Ducati squad was joined by the “junior” Pramac team, well Andrea Iannone, as teammate Ben Spies is currently still out from the injury he picked up in Malaysia. Iannone is planning to use the test in much a similar way to his compatriot in the factory team, and that is just to get comfortable and to grips with his new ride.

At the other end of the pit lane the Avintia team had two brand new riders to test and they both spent the test trying new parts out on their machines. Hector Barbera had come from the Pramac squad, and Hiro Aoyoama has returned from a unsuccessful in SBK as part of the Ten Kate squad.

The test for the CRT team is for the team and riders to get used to the bikes, and towards the end of the test, they will run the spec Magneti Marelli ECU that all CRT machines will run in 2013.