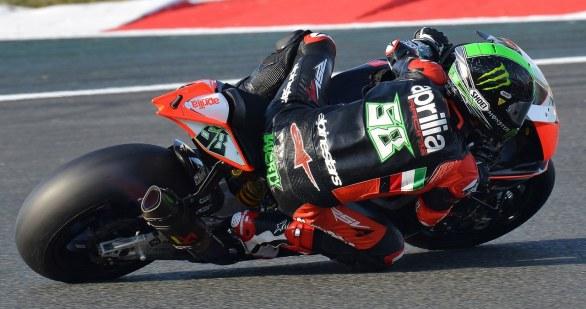 A day after the announcement of his older brother into MotoGP, Eugene Laverty aboard the Aprilia RSV4 has today been the fastest man on Day 2 of the Ducati and Avintia test in Jerez.

The joint MotoGP and SBK test today has thrown up even more headaches for Dorna today after a “production” motorcycle lapped quicker than a multi-million euro race bike.

Eugene Laverty and Tom Sykes both lapped around the Jerez circuit faster than the fastest MotoGP machine of Nicky Hayden. And 6 SBK machines lapped faster than Hiro Aoyama who was the quickest of the CRT machines testing today.

Whilst lapping faster the SBK times are somewhere deceiving with the top riders putting a super soft SuperPole Pirelli tyre in for a final run, an option that the MotoGP riders do not have, who were limited to testing the colder Bridgestone tyre.

Nicky Hayden’s fastest time of the day, testing the new swing arm from Bologna, was a 1’40.855. And new team mate Andrea Dovizoso was plagued by the same problem as yesterday and was once again restricted to just 2 laps.

Andrea Iannone still learning the Desmocidici was approximately a second slower than Hayden today, but the Italian rookie will be satisfied with his efforts on his 4th official day of testing.

Avintia new boys Hiroshi Aoyama and Hector Barbera were both in action again today and the Japanese rider was the quicker of the pair with a 1’42.509, and his Spanish compatriot was 0.4 second slower.

Tomorrow is the final day of the post season testing before the testing ban get’s enforced and it will be the riders last chance to test anything until early spring 2013.