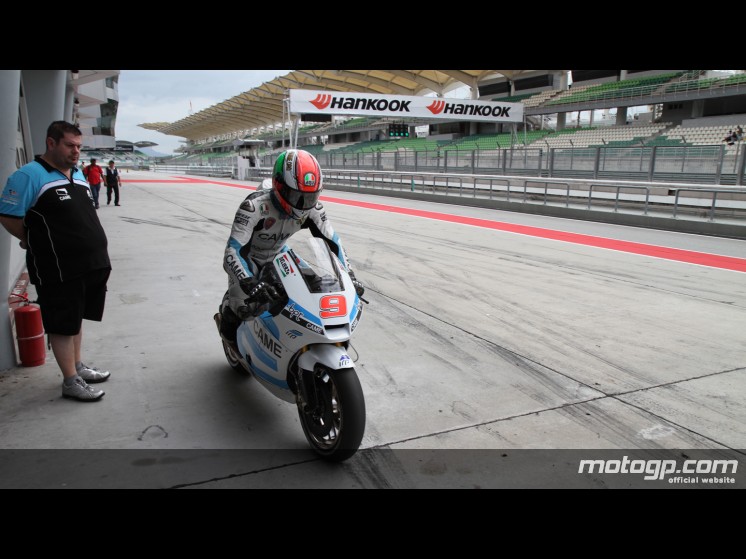 Today the first day of the 2013 MotoGP pre season began with CRT teams in action at the Sepang International Circuit in Malaysia.

Unfortunately today the three CRT teams that will be using the spec Magneti Marelli ECU had their extra tack time hindered by multiple different problems and setting issues with the new ECU’s.

Only two riders actually managed to set lap times todays, one was Ioda’s Danilo Petrucci who managed to put in 27 laps with a best time of 2.06.841 on his 2012 version of the Suter- BMW, complete with new ECU, whilst his new team mate, Lukas Pesek managed none.

Petrucci explained about the lack of track time in a simple tweet.

@motomatters no base setup, and about 15 thousand numbers to write inside the ECU for a complete control

The injured Hiroshi Aoyama was the second rider to record any lap times as he did nine laps. It was nine feeler laps to check the fitness of his wrist above all else, and the best he managed was a 2.12.062, on his Avintia Blusens FTR-Kawasaki. Unfortuantly the pain was too much, and he will decide tomorrow whether to continue.

Aoyama’s new team mate, and CRT rookie Hector Barbera to post just four laps in the day, as he battled with both wiring and electronic issues hampering his test and no lap times were recorded.

Colin Edwards and Claudio Corti spent the entire day sitting in the pits watching their NGM Forward Racing team build their bikes, as they received several parts late. Only Edwards managed to post one lap.

Michael Laverty was the only rider who was entitled to test and didn’t, as his PBMUK squad decided to delay the debut of their own PBM-01 CRT machine (GPMS/Aprilia) until the second Sepang test.

With no substantial track time for any of the riders today, nobody had a real chance to test the new CRT-specific softer compound rear tires that Bridgestone will supply to all CRT teams.

All six riders of these riders will have another day of private testing tomorrow, before being joined by the rest of the MotoGP and CRT teams (running Aprilia electronics) on Tuesday for another three days of official testing.