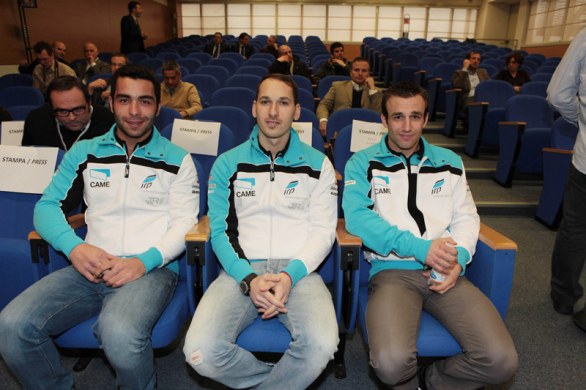 The IODA racing team has officially revealed their 2013 team and bikes at the CAME base in Treviso.

The Italian team Ioda team run by Giampiero Sacchi will again be sponsored by Came (leader in automation systems and access controls) in both the MotoGP and Moto2 categories.

Yesterday Ioda, much like HRC with Repsol, used the Came headquarters in Treviso to present their 2013 line-up with Danilo Petrucci and Lukas Pesekon the Ioda-Suter BMW in MotoGP, and Johann Zarco in Moto2.

The bike will be the Suter BMW that the team used from the Misano GP will be used this season, with the use of the Dorna supplied Magneti Marelli ECU – which entitles them to the two extra days at the Sepang test next week .

Danilo Petrucci was considered a revelation during the 2012 season for punching well above his weight during last season, and he is excited about the season ahead. “I am very happy to be here again. I am glad that Giampiero Sacchi has put his confidence in me for two years.

“This is my second season in MotoGP, after a very hard year for everybody. But it was very useful too. I wish to thank IodaRacing, Suter and BMW for their support and their hard work. I wish to say that I am doing my very best and I will keep on doing it, and hope we will be rewarded with the results we all deserve.”

The Italian will be joined in MotoGP by Czech rookie Lukas Pesek after being away from the GP grid since 2011. “It will be a very a hard season, not only because I am returning to the World Championship after two years, but because it is my first year in MotoGP.

“I am doing my best to be in perfect shape for Sepang and am very excited to test my Ioda Suter. Anyhow I am facing this season with great enthusiasm and full commitment. I take this opportunity to thank Giampiero Sacchi and Came for this great opportunity, and all my fans in the Czech Republic for their affection and support.”

Another new recruit is Johan Zarco in the Moto2 class. The frenchman will replace the highly rated Simone Corsi, and will be aboard a Suter as the team move from the FTR chassis in Moto2. “I am very happy to be part of one of the best teams in the World Championship,” said the frenchman.

“I have had the chance to confirm the proven skills of their technicians already in Valencia during the testing sessions right after the last race. I went to Terni a few weeks ago and have visited their impressive race department, and realized that everybody at IodaRacing works with total commitment to racing. I don’t deny that our main goal for this season is to fight for the top positions and for me to do my very best at all races. We will soon face the official tests where I will work hard to find a good feeling with my new Suter. I don’t know my bike in depth yet, but I felt a strong sensation when I first rode it in the tests in Valencia. Since I am here with the sole intention of fighting for victory, I want to be on a good shape from the very first race in Qatar.”