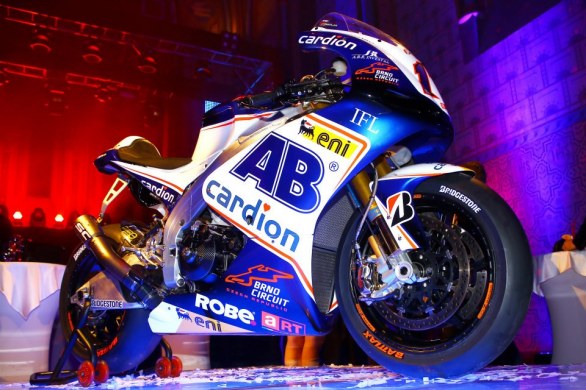 Last week it was Ducati, then Honda, now Cardion AB have revealed their 2013 machine.

The Cardion AB team have switched from the Ducati Desmosedici after a disappointing 2012 in which Karel Abraham finished 14th, onto the ART CRT machine, which proved to be the pick of the bunch in the CRT category.

Abraham got his first taste of the ART during the Valencia post-season test which was hampered by rain, and will get a second feeler at the Sepang test in just under two weeks time.

The team however won’t be entitled to the extra two days prior to the test as they are electing for Aprilia electronics rather than the Dorna Magneti Marelli ECU.

Speaking at the unveiling rider Karel Abraham said, “We have to be prepared for these tests almost as if it were a real race. I want to see to where we stand compared to the fastest CRT riders.

“My first impressions at the Valencia test last year were very good, but since then many things have changed, especially with regards to the electronics, which is expected to have improved top speed.

“This winter I worked on getting physically prepared for the new season. I can’t wait to race with Pesek, it will be a very interesting fight, but much will depend on the bikes and this we’ll be able to understand only racing.”