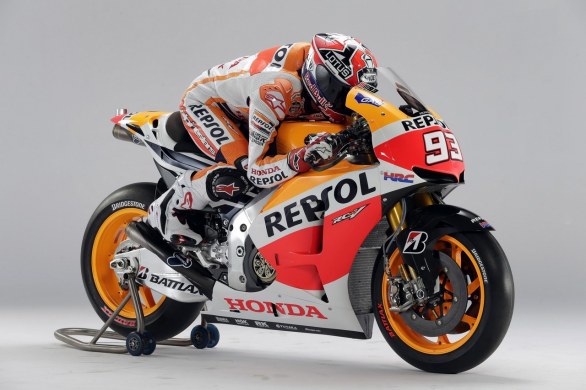 Repsol Honda have revealed their 2013 RC213V at the Repsol HQ in Madrid today.

Along with releasing their 2013 liveries, they also officially unveiled their 2013 riders, Dani Pedrosa and Moto2 World Champion Marc Marquez.

During the ceremony the riders were on hand to whip the sheets off their new rides, and they were accompanied on stage by HRC president Shuhei Nakamoto.

The bike itself doesn’t look to different to past models, just more white on these bikes as expected, but all the HRC bosses were extremely optimistic at the unveiling of their new bike after the form displayed in the latter half of the season by Pedrosa.

There was also the announcement that Livio Suppo is has taken the role of team principal for the HRC team.

Speaking on stage before the team and bikes were revealed Nakamoto said: “In 2013 we will again have a very strong team – Dani comes into this season after a fantastic 2012 and with new motivation, Marc is a great talent and I’m sure it won’t be long before we see him on the podium.

“I am excited about the new structure and everyone at HRC will continue to work hard in the bike’s development to give both our riders the best chance of victory.”

When asked about his rider Marc Marquez the Honda boss said, “Everybody knows a fast rider is fast from the beginning, but anyway Marquez is a rookie and has to learn lot about MotoGP, especially in the tyre management area.

“To make one good lap time is not so difficult for him, because he has very good times, but he needs a little experience to manage the tyre and maintain the lap time.

“But I believe even at round one, he has the possibility to finish on the podium.”

And when asked about his now leader of the team Pedrosa he said: “2012 was a good season, but from Honda’s point of view we struggled with the minimum weight regulations that changed shortly before the season started… Especially for Dani.

“A 4kg increase is a big difference for Dani, but in the second half of last season Dani was so strong. He won seven races including in the rain at Sepang. So Dani is still improving as a rider.

“We believe we can continue from last year’s results and we believe we have a big chance to win the championship this year.”

Next it was the turn of Pedrosa to speak, and he said: “I am very happy to have been here at Campus Repsol today, and to have been the one unveiling the bike and its new livery. We had run with the old design for a long time and I think that now is a good moment for a change.

“This year’s bike has a fresh touch to it, which can give us a boost at the races. I hope the fans like it too. I’m starting this preseason really keen, as at the Valencia test after the last race of 2012 we had so much rain that we couldn’t do much.

“I can’t wait to get to Malaysia and have a few days to put the bike through its paces, enjoy myself and see which parts we are going to use for the opening race.”

New boy Marc Marquez then added, “I have really been looking forward to this moment. I am very happy to have presented the new colour scheme for my move up from Moto2 to MotoGP.

“Seeing the bike painted with the Repsol and HRC logos makes you feel very satisfied with this new step forward —it makes you realise what a dream-come-true it is. I’m like a kid with new shoes!

“I enjoyed the atmosphere of the presentation a lot, and I was able to see that the press attention for MotoGP is light years ahead of that for Moto2. We’ll adapt to this, little-by-little. In the end, the important thing is what happens on the track, so I can’t wait for the Malaysia tests to start.

“I think that it was a very positive initiative to broadcast the presentation online, because I’m sure lots of fans would have liked to have attended this event. I hope that they enjoyed it a lot.”

Were not sure about a kid with new shoes, but we can’t wait to see Marquez in action on his new RC213V!