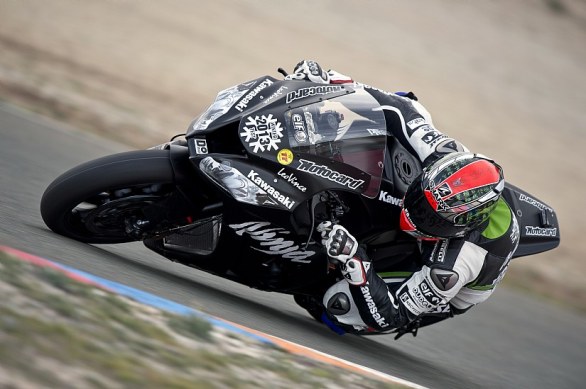 It’s been a week now since the SBK winter testing ban has been lifted, and three teams have set to work right away.

The Kawasaki, Fixi Suzuki were in Almeria, whilst Alstare Ducati have set up in Jerez to test their 2013 bikes, and in some cases battling European winter weather to try and improve their bikes ahead of the season opener in Phillip Island in just over a months time.

Kawasaki had their two-day testing session at Almeria cut short today due to strong winds. Tom Sykes was able to put in a full day Wednesday, working on suspension and chassis components updates. He posted a best time of 1:34.9, while French team mate Loris Baz lost some time re-learning the circuit and has some issues.

“The good news after day one was that we were straight on the pace after the winter break and got up to speed quickly. It proved a very useful day and I did 82 laps.

“There was a strong wind on day two, which is a shame because we did not venture out on the track. Even when I woke up this morning I could hear the wind really howling around the hotel.

“For us it all worked out nicely anyway because we worked on suspension, and other things to keep us moving forward. Now we go to Jerez for two days and I am looking forward to continuing our good work there,” said Sykes.

Whilst Baz said, “I did not have a full first day because of some issues but we got back into riding the race machine and it was really good to get used to the bike again.

“For me, we tried to find some better things under braking. I think we did that so I am looking forward to do more work in that area at the next test in Jerez.

“The last time I rode at Almeria in the dry was on an 80cc bike in 2005, so I had to learn the track a little. It is quite different on a Superbike!

“We know what we need to try and confirm when we get to Jerez, so I just want some good weather then so I can ride for two full days.”

With Tom Sykes and Loris Baz deciding to sit out the second and final day of private testing at the Almeria circuit in Spain, the track was only used by the FIXI Crescent Suzuki riders Leon Camierand Jules Cluzel.

Camier tested the new-spec 2013 engine but was unable to make a complete evaluation due to the difficult conditions, whilst new boy Jules Cluzel continued his learning process of the GSX-R, improving on lap times, but he also suffered a crash that hindered his progression.

“The weather today was awful; because it was so windy it made it difficult to do anything really meaningful.

“We managed to get a few jobs done and although we tried the new-spec engine, we couldn’t really understand the differences because of the conditions. I am now looking forward to Jerez and carrying on from the progress we have made here during these two days and trying out the 2013 engine properly,” said Camier.

Both the Kawasaki and Suzuki teams will be backi in action this week at Jerez, to continue their testing between 22-23rd January where they will be joined by the BMW, Aprilia and Honda SBK teams..

Meanwhile over the weekend at the Jerez circuit the Alstare Ducati team were attempting to post laps on the new 1199 Panigale, but have been battling with heavy rain and strong winds.

Both Carlos Checa and Ayrton Badovini were going to use the three days to attempt to learn more about their brand new Ducati, but they have been forced to sit out most of the first two days, only able only to go out at the end of the day on a damp track to put in only a few laps.

Ducati will be hoping that the weather during their next two test sessions that are scheduled for February in Australia, will be much more conducive to testing ahead of the season opener.