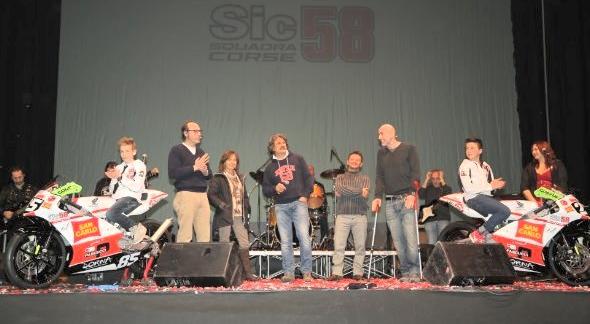 Yesterday Marco Simoncelli would have been 26. Saturday night for the second consecutive year the Buon Compleanno Sic (happy birthday) event took place to remember the late and still very much missed Super Sic.

The event which was hosted at the 105 stadium in Rimini, was organized by the Marco Simoncelli Foundation, and all proceeds from the evening going to help the Foundation carry out their charity projects.

Almost 5000 people turned up for the event including friends of Super Sic such as Valentino Rossi and Mattia Pasini.

The event was also used for the official unveiling of the brand new “Squadra Corse Sic 58” team.

The team will be run by Marco’s father Paolo Simoncelli, and with the technical support of Fausto Gresini and sponsorship of San Carlo, the team will run young riders in the Italian PreGP Championship on Honda’s.

The 2013 riders that have been announced are Kevin Sabatucci and Mattia Casadei who will compete in the national championship for for 13 to 16-year olds.

The idea of forming a racing team to honour Simoncelli, came from his former MotoGP crew chief Aligi Deganello and legendary helmet designer Aldo Drudi back in March 2012, who both thought that Paolo Simoncelli could really help young Italian riders.