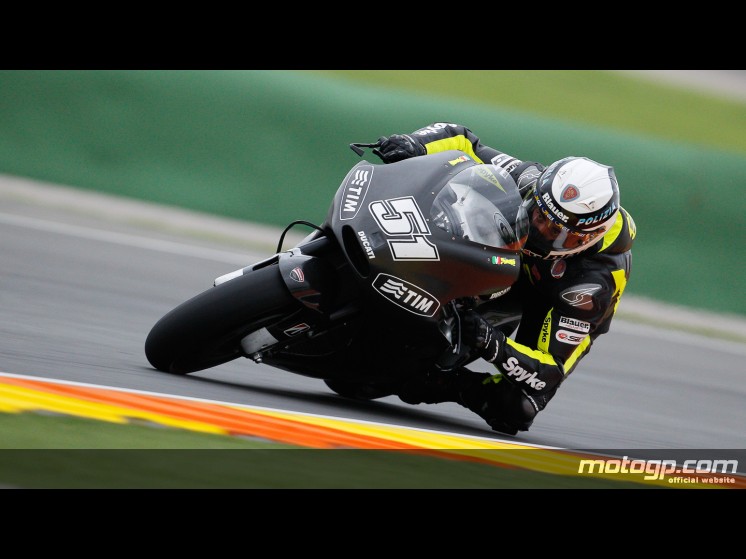 The Valentino Rossi project hasn’t just hurt the man himself. It has left the historic Bologna brand in tatters.

But from 2013 it will be from a clean slate. Gone are Rossi and Filippo Preziosi, who has been moved to the research and development department. In come Audi, Dovi and Bernhard Gobmeier.

There is more emphasis on the “satellite” team too. The Ducati Junior team run under the Pramac banner also has two new recruits in Andrea Iannone and WSBK 2009 World Champion Ben Spies.

But the one man who may turn out pivotal to the whole project is recently acquired test rider Michele Pirro.

Pirro who left his Gresini CRT ride to take the role of test rider alongside Franco Battaini, has been praised by Vittoriano Guareschi, the Ducati Factory team manager.

“We’ll be testing at Jerez in January but only the test riders. The rules state that contracted riders can’t test before February. Regarding Pirro it’s important that he understands the bike. He’s fast and for us it’s important to have a rider like him that can take the bike to the limit. Next year our test team will be very strong. Battaini has a lot of experience and is in excellent phyisical condition which is important as it allows him to put in a lot of miles on the bikes. Michele is fast rider and I think that our test team will be very good.”

Whether or not Pirro’s experience and effort turns out to be as valuable as Guareschi says, and thinks is still to be seen. But we should get an idea of the work he has done from the Valencia, and Jerez tests when the GP paddock reconvene in Sepang in early February.