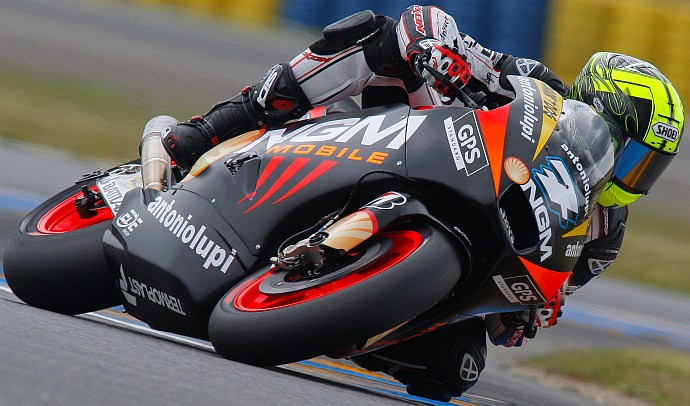 Chris Vermeulen could be on the verge of a sensational move back into Grand Prix racing with the IODA team.

The Aussie who raced for Suzuki in MotoGP back in 2009 is eyeing a potential move back alongside Danillo Petruci on the Suter-BMW machine.

The 30 year old from Brisbane has had a tough two years out of MotoGP and despite signing to ride for Kawasaki in World Superbikes injuries and a lack of form left him without a ride for 2012.

A wildcard ride in Le Mans replacing the injured Colin Edwards back in May was the last time he raced competitively on the roads, and that was on the Forward Racing Suter- BMW, where he finished 17th.

Speaking recently Vermeulen said “I would like to sign a test rider contract with a MotoGP team. Just so I can find out if I still have the necessary speed, and gradually build my confidence again. With the knee surgery there have been no problems. ”

However the 2007 Le Mans race winner may be given the chance to race a machine next year. Roberto Rolfo’s contract was over before it really began with just a weekend in Valencia, and the IODA team are believed to be looking for an experienced rider alongside Petrucci to help develop the bike.

“I do not ask for huge sum,” he insisted in an interview with www.speedweek.de. “I want to race again and to get another chance.”

With Stoner’s retirement it could be another step to appease Australian fans too, alongside class rookie Bryan Staring in the CRT class.

He has also been contemplating getting back in touch with Suzuki about a test riders role and a potential return with the factory that gave him his one and only MotoGP win in 2014 when they return, but that appears a long way off at the moment.

Despite some unsavory words regarding the Suter-BMW and the CRT class it may well be the opportunity, and the step back into world class racing that Vermeulen needs.