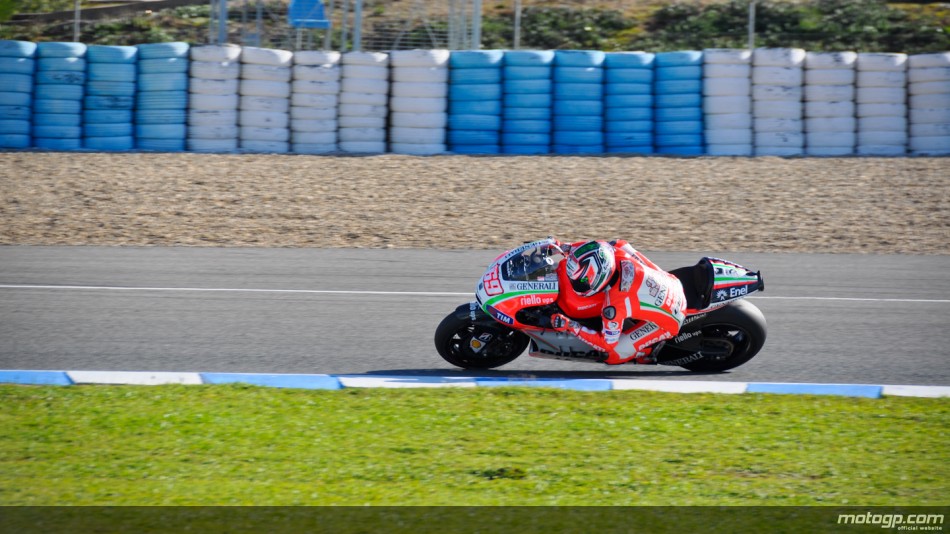 Rain has ruined the last day of the final test of 2012 for the Ducati and Avintia teams, in Jerez.

After two successful days of testing in Jerez sun, the Ducati and Avintia teams were hoping the final day would follow suit, unfortunately there were greeted by downpours and a soaking wet, cold November day in Southern Spain.

The Kentucky Kid was the only man to venture onto the wet rack, but after a few laps decided that the risk wasnt worth the rewards.

Teammate Andrea Dovizioso decided that with the reoccurring collar bone problems it wasn’t worth the risk, and he will be going under the knife on Tuesday to have the plate removed from his collar bone.

Rookie Andrea Iannone in the Pramac team was also sidelined, and didn’t even get into his leathers, nor did Avintia duo Hector Barbera and Hiroyshi Aoyama. Although the trio highlighted the good work from the previous three days, and insisted that despite the wet final day, it was a very successful test.

The testing ban is now in place, and next time they will all be in action will be at the Sepang International Circuit 5-7 February 2013, where the conditions will be considerably warmer, if not necessarily drier.