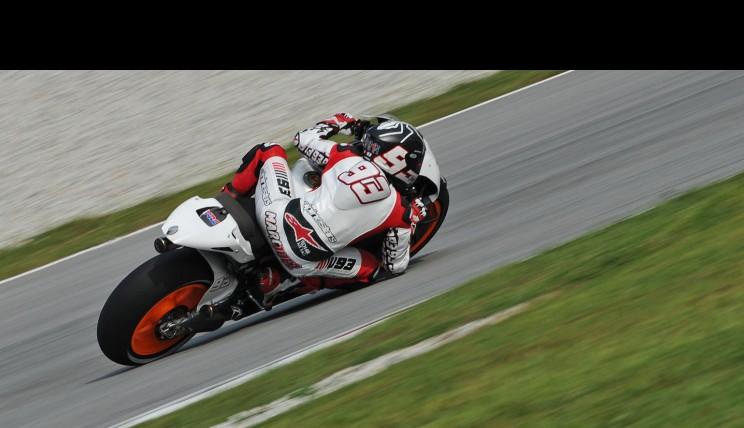 Marc Marquez and Alvaro Bautista have completed the third day of the three day test at the Sepang International Circuit in Malaysia.

Rain in Sepang over the night meant that Marc Marquez and Alvaro Bautista had to wait till late morning before heading onto track, and only got a brief window to test their 2013 machines before the rains returned in the afternoon.

Riding for the third day in a row Marquez managed to complete 41 laps with a best time of 2.01’56. Due to the track conditions he wasn’t able to improve on his time from yesterday of  2.01’355, which remained the quickest time of the test.

When asked about his final day Marquez said “At the beginning of the day the track was slightly wet from last night’s rain, the same as yesterday morning, so we didn’t go on track until 11.45am. We tested many things today, we knew that some wouldn’t work but it gives us an idea and direction for the testing here in February next year. In the end I am very happy because my lap time was pretty constant and I feel a good rhythm on the bike now. We planned a long run at the end of the day but then the rain arrived again around 4.30pm.”

He went on to talk about how he was adjusting after the three days “physically, I’m happy – for sure I need to do some work now in the winter to arrive at the next test stronger and fitter but in general I feel good, even on the longer run of 10 laps today, the lap time was consistent and I felt strong. It’s been a good test and I feel we have improved each day, now we must wait a few months until we are back here with everyone else!”

Alvaro Bautista was doing more development work today, especially working on his Nissan brakes and he also confirmed he would be sticking with the Showa suspension for 2013.

When interviewed by MotoGP.com he said “We have done a lot of work over the past three days despite the bizarre weather, which only relented for a day, and the less than perfect track conditions.”

He continued “I have completed 110 laps altogether and now we have a clearer idea of the direction we need to take in the first preseason tests of 2013. I am satisfied and feel I am heading home safe in the knowledge that next season promises some good results for our team.”

With the three day test concluded the Spaniards will have a chance to relax and enjoy a winter off before heading back to Sepang in early February to begin the next test.