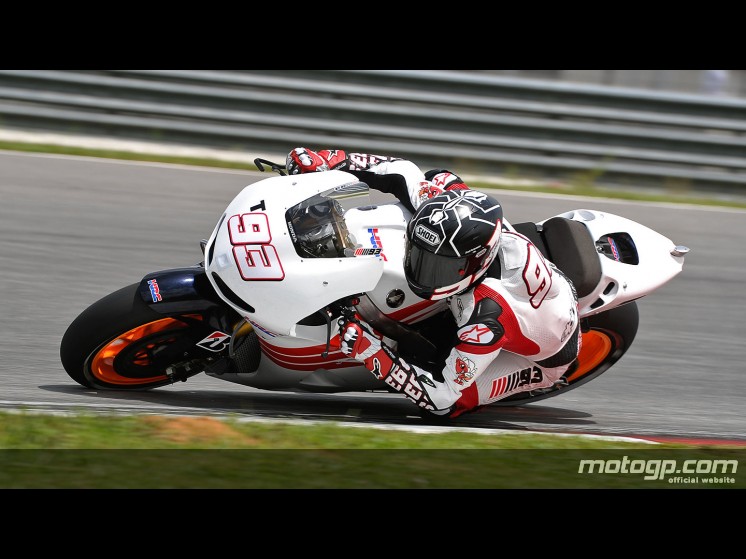 Marc Marquez was back on track today as he took part in the second day of the HRC test in Sepang.

Joined by Alvaro Bautista on the Go & Fun Gresini Honda, and the first day was marred by bad weather. A three hour stint across lunch time was all the Honda riders managed on Day 1.

On Tuesday morning the Honda riders were greeted with glorious sunshine and perfect conditions to test.

Marc Marquez only manged 24 laps yesterday but today he managed more than double that and put 60 laps in around the Sepang International Circuit. Marquez also post the fastest lap of the week so far, a 2’01.355.

After the day had finished Marquez said “Today we finally had dry conditions for the whole day! In the morning the track was a little wet still from yesterday but it dried up pretty quickly and we were able to go out on track at around 11.30am and make use of the entire day.”

He continued “In the first exit we improved our time from yesterday, which is definitely a positive. Then we tried some new set ups and I started to understand the bike better and my confidence began to grow. I also tried the 2013 prototype today, which felt good, but it’s more important that I take my time to learn the MotoGP bike and adapt my riding style to suit these bigger machines. It’s been a great day and I hope the weather remains dry for tomorrow so we can cover more laps and continue to learn.”

Much like Marquez Bautista also benefited from the who day to test, and he also managed to post an improved lap time from yesterday. Bautista posted a lap of 2’01.950 as he continued to test new parts from Showa and Nissan.

The two Spaniards were once again joined on track by Honda test riders Kousuke Akiyoshi and Takumi Takahashi. Takahashi continued his “training” with the team.

Takahashi suffered a crash around mid-day, but walked away unhurt.

Tomorrow is the final day of the HRC 3 day test and will be the last chance Marquez and Bautsita get to try things out on their machines untill the second IRTA test at the same track on 5th February 2013.