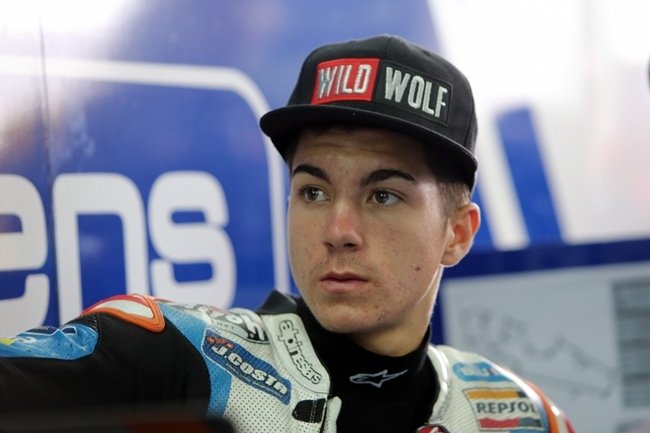 Spanish Moto3 superstar Maverick Viñales may finally be getting his move away from the Blusens Honda team for 2013 after all.

Viñales of course sensationally walked out of his Moto3 team in Sepang after a falling out with his managed Richard Jove with the ink still wet after signing a new deal. Over what was believed to be Jove withholding offers from Viñales, apparently from Ajo KTM and Aspar Moto3.

After apologies and apparent remorse in Australia Viñales completed the rest of the 2012 season. But now it appears the position has become unattainable within the BQR squad and Viñales may finally be getting his move.

It has been understood that Maverick has been contacted by both the Spanish Laglisse squad and the Belgian Marc VDS squad about riding their KTM’s in 2013.

The only stumbling block for the moves at the moment is the half of a million euro buyout clause that Maverick has in his recently signed contract with the BQR squad.

Viñales is prepared to take a pay cut from his extortionate wage he is on as the 17 year old just wants to win races, and in turn World Championships.

Catalonia radio this weekend broadcasted that Viñales had signed a deal with the Laglisse KTM squad, run by Pablo Nieto, son of Angel, to partner new signing  Murcia Ana Carrasco in the 2013 World Championship.

These rumours came on the back of the news that Viñales, with permission of the BQR team, tested the Laglisse machine in Albacete last week.

The official word is that Laglisse have submitted an offer to buy out Viñales, and have him on their bike for next season, but their offer was way below the half of a million euros.

The Marc VDS rumours have come around from since Marc VDS director Michael Bartholemy wants to run two bikes in the Moto3 World Championship, alongside rookie Livio Loi, as well as the Scott Redding and Mika Kallio in the Moto2.

Early indications suggest the Bartholemy and VDS are willing to offer up to 450,000 euros to try and prize Viñales away from the BQR outfit.

A lot of it will depend on how Viñales does this week aboard the Laglisse machine when he tests the KTM at Almeria, and who has the deepest pockets to buy his contract out. What is for sure, is that one way or another Viñales will be in Moto3 next season, and looks more likely with every passing day that it won’t be with Jove and won’t be on a Honda BQR.