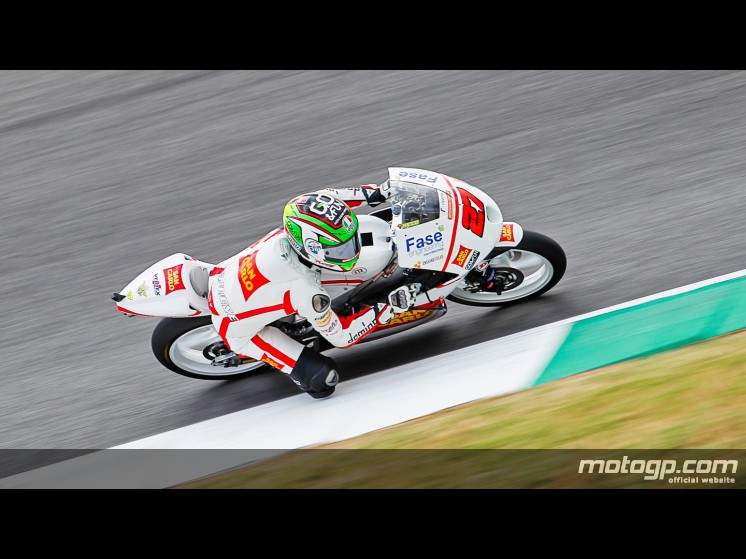 Today on GPxtra, we have a world exclusive interview with current Moto3 sensation Nico Antonelli.

Nico is just 16 years old and is part of a new generation of Italian riders coming through the world circuit. From the hotbed of Italian racers Nico is also from a Rimini seaside resort. This is Nico’s full season in World Championship racing and he has been racing under the San Carlo Gresini banner aboard a FTR Honda. With a best place of 4th twice in his debut season Nico has real grounds to build on.

Hello Nico, thanks for joining us

At what age did you start riding a motorbike? I started at six years old, with a mini track in Cattolica.

How old were you when you won your first race, and what kind of race was it? I won my first race as a 7 years old in Cattolica, it had been a hard fought and it was very entertaining, it was the first win and I will always remember it.

Why have you chosen the number 27? Is there a story behind it? Not exactly, my favourite number is 23 and for me that has a very important significance, however, it was occupied by another rider and then between the numbers were left I liked 27 the most.

Who was your hero growing up? My favourite riders are Pedrosa in MotoGP, and Marquez in Moto2

What is your favorite circuit and why? My favorite track is Mugello because it is fast and gave me a lot of fun. In addition it is the track where I won the Italian Championship last year.

Who is the best person you’ve ever raced against? In this year’s World Championship. There are many riders that it’s nice lottery, there is not one in particular right now.

Obviously this is your first full season at world championship level this year and you’re now with the best, racing on new tracks, how has it been? This season was the most beautiful experience of my life, I’m happy with how it went. Unfortunately in some races I could do better, such as a two podiums, but some things I did not succeed, but I am still very satisfied.

And finally what are your hopes for next season? For the next year I hoped to do much better. This year my dream was to fight for the world championship next year, I hope to do it!

Congratulations on a debut season in World Championship racing. I am sure it won’t be long till we see Nico, not only on the podium, but the top step. And I know that I am backing Nico to one day be a world champion.