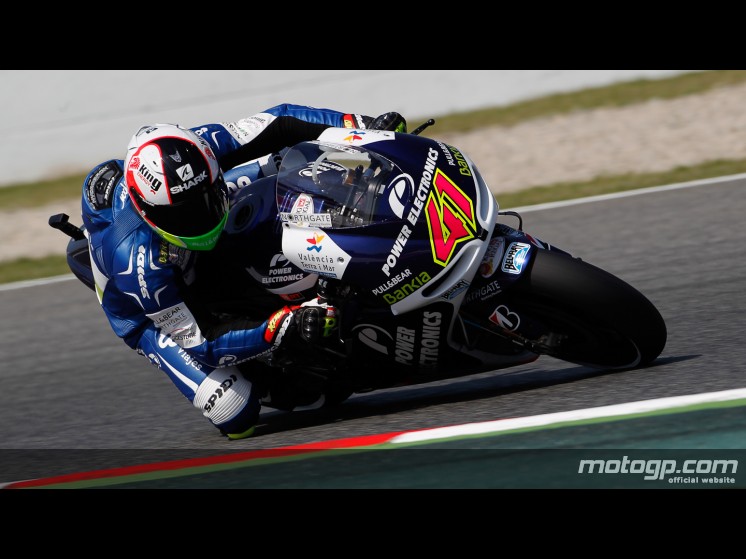 In MotoGP 2012 we have had the introduction of the new claiming rule team  (CRT) bikes joining the fully prototype monsters.

Whilst the CRT machines don’t yet attract riders the caliber of Rossi or Lorenzo, they do give the “lesser” riders the chance to compete in MotoGP and still gives them a chance to exploit their skills.

My 2012 CRT underrated rider is a man who is on the best of the CRT bikes, and the man who is leading the mini championship but yet still isn’t regarded as the best rider of the new machines.

This man is Aleix Espargaro.

Aleix joined the Aspar team in 2012 to ride on the ART machine, alongside the much more experienced, and many feel the unfairly sacked Randy De Puniet. Many were expecting De Puniet to dominate and really shown his dominance, instead it has been his younger team mate that has been more impressive and currently leads the championship.

Coming into MotoGP Aleix had never won a championship, nor has he even won a race, with only ever one podium to his name, some could say that he is fortunate to even be there in the first place. But he is showing them that he is about more than good luck or sponsor money.

This is Aleix’s second full season in MotoGP. His previous season was back in 2010 when he was riding the Pramac Ducati. This season though, Espargaro has come back with much more purpose and ability. Back in 2010 he ended the season with 65 points. This season he is already 4 points better off with a round still to go.

Whilst some could argue that with him leading the championship it would be wrong to say that he is underrated, but I find the lack of backing he receives shocking.

I really enjoy watching Espargaro ride a motorcycle. He is a “old school rider” he isn’t afraid to stick his front tyre in. He isn’t flustered when the racing gets physical. But as well as being a hard, throw back racer he is a loveable character off it. Always smiling and a close relationship with younger brother Pol makes it even more surprising that the media and fans don’t warm to him.

Regardless of opinions, hopefully with a CRT title looking iminant the fans should start to acknowledge him more and from next season he will be looked upon as a genuinely quality rider.

I will be doing my final piece on underrated riders on the MotoGP bikes this weekend. Keep an eye out for it.