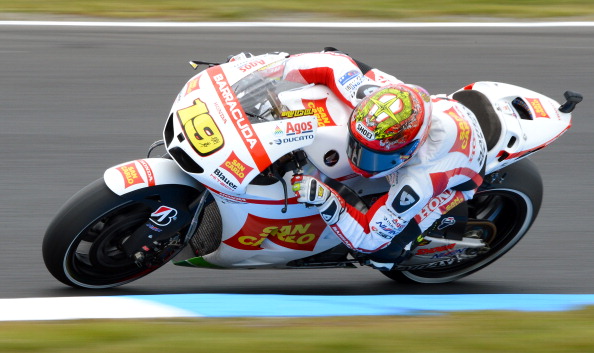 My MotoGP 2012 underrated rider of the year is a man who hasn’t had an easy task. Only one rookie this season, and as exceptional as Stefan Bradl has been this season, he is very much receiving the plaudits that he deserves this season.

I wrote an article on Alvaro back post Japan and it was all about how little credit Alvaro gets for the work he does. But I have to choose him again. With a last minute ride and new suspension and brakes it was never going to be easy for Alvaro this season, with the added pressure of riding the bike that was going to belong to the 58, to say pressure has been on would be an understatement.

Regardless of the pressure that Alvaro took with the ride he has risen to it rather than succumbed to the expectation.

Coming into MotoGP Alvaro was a world 125cc champion and a constant title threat throughout his 250 days. Usually with Aspar on the Aprillia.

For 2012 Alvaro found himself on a Honda RC213V for the first ever time, after only ever riding Suzuki and their MotoGP bike, and that itself was daunting. With the added complications of using Showa suspension rather than Ohlins. Whilst seemingly just a sticker on the shocks there is no data at all, so he is forming all the data this season.

Despite all this, and riding a strictly satellite bike he still finds himself fifth in the championship, ahead of 1 Honda, 2 Yamaha’s and 4 Ducati’s.

Alvaro has re-signed with Fausto Gresini and his Honda team for next season. He has two podiums to his name this season and is currently beating Valentino Rossi in the championship.

Next season I wouldn’t put it beyond Alvaro to not only add to his two MotoGP podiums from 2012. But to have more than one race where he finds himself. For his two podiums, and constant top 6 finishes, despite not receiving much credit for the work he has been doing, Alvaro Bautista is my MotoGP 2012 Underrated rider of the year.