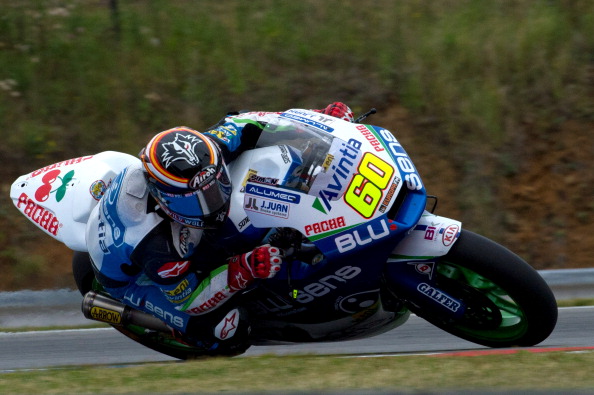 After yesterday I revealed who my underrated rider in the Moto3 class was, and today it’s time for the Moto2 category.

This man isn’t so much underrated, but more forgotten. I know lots of riders have pedigree, and the higher you get the more there is shown. But this man is a 125cc world champion, and a Moto2 runner up.

The man is of course Julian Simon.

Julian Simon was the 125cc world champion with the Aspar team. Beating the likes of Marc Marquez, team mate Bradley Smith and Stefan Bradl nearly every weekend, all of which now are, or will be in MotoGP.

So where did it all go wrong for Simon?

Well in 2010, his first season after his title winning year, and the first season of the new Moto2 category, he was a main challenger. He ended up finishing second in the world championship to the vastly experienced Toni Elias. No wins but 8 podiums and 3 poles showed that Simon wasn’t out of his depth in the bigger bikes.

Going into the 2011 season many were tipping Simon as a potential champion come Cheste in November.

Lying 4th in the Championship with the series heading to Montmelo for the 5th round of the championship the race was only 7 laps old, when in a battle for the lead Julian Simon was taken out by Kenan Sofuoglu. The result wasn’t just a DNF for Simon. It was something much more serious. Simon had severely broken his leg. After the broken leg Simon only managed to start four more races before the end of the season with a best position of 7th.

2012 has been largely a season to forget for Simon with only on podium, and finding himself 15th in the championship. But his talent hasn’t totally be forgotten by his BQR team who have let Simon test their CRT Kawasaki BQR MotoGP bike in a IRTA test in Brno, incidentally in which he lapped faster than both current riders in MotoGP.

At just 25 years of age it certainly isn’t too late for Simon, and in the BQR set up, he is in one of the biggest teams in the paddock, so opportunities shouldn’t be sparse. Next season do not be surprised to see Simon not only claiming his first win in the intermediate category, but to be challenging the likes of Espargaro, Luthi and Redding for the title in 2013.