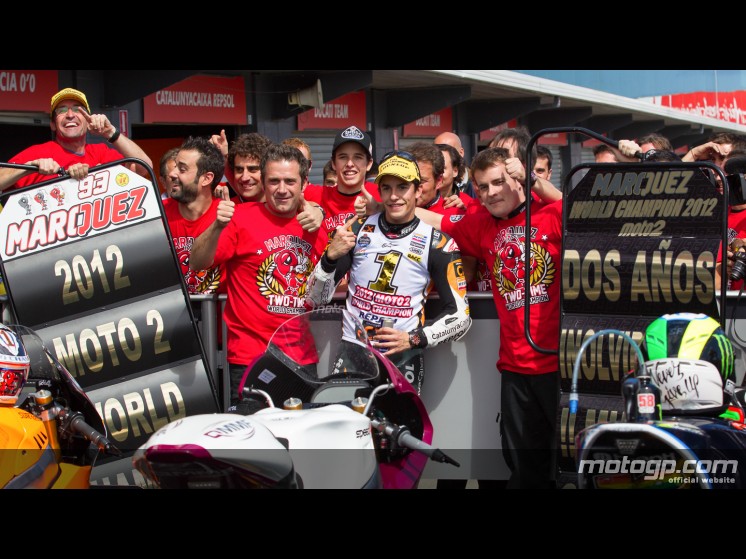 Marc Marquez is the Moto2 World Champion after taking third place at Phillip Island meaning nobody could catch him.

I said after the San Marino Grand Prix it was just a matter of time until Marc was crowned the 2012 Moto2 World Champion, and he now doesn’t have to wait any longer. But was it every in doubt?
The 19 year old has won eight races this season and has added another five podiums to that, and since Assen he has been in a class of his own.

Coming into the season Marquez was the firm favorite to take the 2012 title after coming so close last year, before eventually being pipped by Stefan Bradl after a eye injury caused from a crash in the penultimate round in Sepang. But in the early part of the season he didn’t have it all his own way.

After winning is Qatar and then again at Estoril it wasn’t until Assen that he won again. But the Assen win could be looked back on. Espargaro, Luthi and Iannone had closed up to make the title close, but with Luthi and Espargaro falling it was a chance for Marquez to assert some control.

As the race unfolded Andrea Iannone shot away in his trademark style he seemed to be able to do, whilst Marc was battling with Scott Redding. With 7 laps to go Marquez finally passed and stayed ahead of Redding, but Iannone was 7 seconds down the road.

Marquez caught Iannone hand over fist and with two laps left caught and passed Iannone. It was a real dominating, assertive and authoritative performance, which just reminded everybody why he was the next big thing.

As well as reminding the punters what he could do, it seemed to give Marquez confidence in himself to remind people hat he can do. He went on to win five of the next seven races, dominating and showing master classes in the process.
His undoubted finest race was the one that nigh on cemented his title. The first leg on the Pacific trilogy. In Motegi, Japan. Marc started the race in second place, but failed to select a gear on the grid. He was stranded and was lucky not to get hit from behind as he stand stationary at the front of the grid whilst bikes shot past him. When he eventually got going he went into the first corner in 28th position.

After sweeping in and out of slower bikes he found himself working his way back up the field. It was enthralling. He was shooting up gaps, not wasting any time. Words are hard to describe how exciting and edge of the seat it was to watch. But after one lap Marc had found himself in 9th position. He then worked up the top 9 to eventually win the race ahead of his nearest challenger in Pol Esparagaro.

Marc’s 2012 wasn’t handed to him, he earnt it the hard way. And he has earnt his ride in MotoGP the hard way. People had snidey comments regarding how he’s got his ride and how he is a golden child. But Marc Marquez at 19 years of age is a double world champion. He has done something that Jorge Lorenzo didn’t manage to do, something Casey Stoner couldn’t do. He has a wonderful symmetry to Valentino Rossi. A season to learn, world champion.

Whilst he doesn’t have an easy role in replacing Stoner, if there is somebody capable of it, its Marquez. And I for one can’t wait to have him in MotoGP next season. Marc is aggressive and smooth, he can find the limit of the tires and the track as soon as anybody. He is a racer first on foremost. He sees a gap and he goes for it. Whilst a pocket sized rider he loves the fairing bashing. He is a quiet smiling charming lad who gets the “white line fever” once the visor is down. Once again reminiscent of a certain Valentino Rossi.

An indication of how highly Honda rate Marquez is not only shown with them handing him a factory RC213V ride next season, but in a recent interview Nagamoto San has said that next season he is expecting to see Marc on the podium and challenging for race wins. Now at 20 years of age if Marc is to do that then he really will be beating some special riders.

But for now he can celebrate and enjoy his second world title!