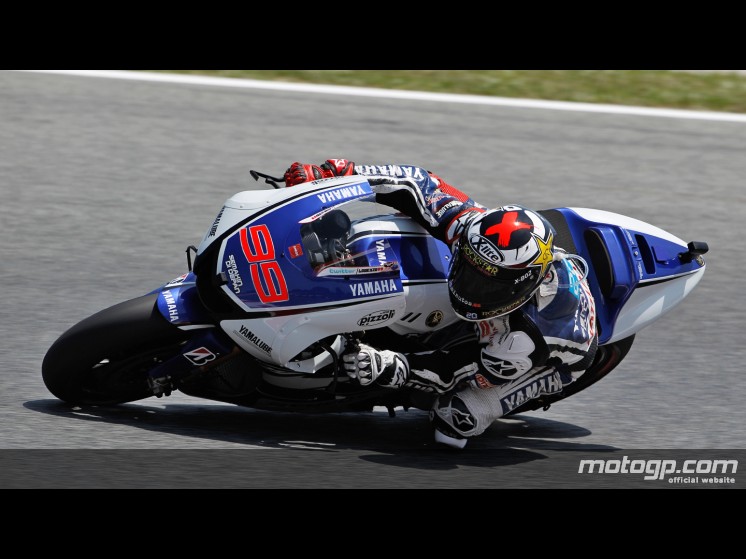 There was a wonderful symmetry. The same pit board, the same wheelie. The podium celebrations. Jorge Lorenzo likes to win his world titles in the same way.

As Lorenzo rolled into Parc Ferme in Phillip Island he was screaming under his helmet. He bellowed out, just as in Malaysia two years ago. WE ARE THE CHAMPIONS was the theme, he was backed up by his crew waiting there. Forcada, Zeelenberg, every mechanic, friends, Ricky Cardus was there, all singing with jubilation. It was out of tune, again, but this doesn’t matter, were not on the X Factor. Jorge Lorenzo and the 99 team are once again world champions.

17 rounds spanning four continents wasn’t easy on Jorge, its never easy on anybody, but since the San Marinese round back in September it was almost a waiting game for Jorge. Riding with immense pressure and he couldn’t afford to slip, one mistake, one tiny error could’ve cost him this second title he so desperate craved. Add into that his engine situation after the Assen horror show and it was a psychological battle on the track as well as a physical one.

But this was all put to rest this weekend “a weight has disappeared from my shoulders,” it was so simple, so generic, but it was the perfect thing to say from the rider who has been perfect all season.

2011 had been a disappointing year for Lorenzo, he failed to defend his world title with Casey Stoner running away with the title, as well as loosing his title he also lost half his ring finger in a crash at Phillip Island meaning he missed the last three races of the season. He went into winter without the post Valencia test and work to do.

2012 was a new dawn for Jorge, and after the Sepang and Jerez tests he went into the season with confidence. He wasn’t defending a number one plate, nor was he the fastest rider in the winter tests. But what he, and Yamaha had done was build a new 1000cc machine that was capable of challenging Honda once again.

I don’t want to run through every race this season but Lorenzo has been sensational. His

trademark smooth riding style, and his ability to lap consistently at a pace unmatched by anybody. Stoner could beat him over one lap, but Jorge realized that a race is over 30 not one. He looked after his new Bridgestones that were introduced for this season and got his back consistency and confidence from his title winning year.

Along with those skills he was famed for, he added his steel and his new skills he had developed during the 2011 season when it wasn’t going his way. He had learnt to race on a bike that wasn’t the best, he had developed his race craft. Added to his already superior and sensational riding ability.

He not only this year proved his questionable ability on a motorcycle, but he has also answered the critics to one of the biggest questions over him, the development of a motorcycle.

When Lorenzo joined Yamaha he was on a bike that Valentino Rossi had developed. Lorenzo had joined that Rossi had been developing for five years. He jumped right onto a race winning motorcycle. Then, when he started winning and beating Rossi the critics were out. Then to make things worse for Jorge, the first Yamaha without Valentino helping develop was a shocker. Only winning 4 races all season compared to the 13 of the Honda.

But in 2012 Lorenzo put all these worries to rest. A bike solely developed by Jorge, has now gone on to win the World Championship. Not only has the bike Jorge developed now a world title winning bike, but the satellite machine has been the best by a country mile. Jorge Lorenzo has shown he can develop and get a race winning machine built.

Lorenzo’s idol and hero was Max Biaggi. He is now his close friend. He was in Magny Cours to celebrate Biaggi’s world title. Biaggi has four Grand Prix world titles, all in 250. Where its about corner speed and consistency. Lorenzo now has four Grand Prix world titles, two in 250 and two in Moto Grand Prix, where he has become synonymous with corner speed and consistency. Like i said, there’s a wonderful symmetry in what Jorge Lorenzo does.