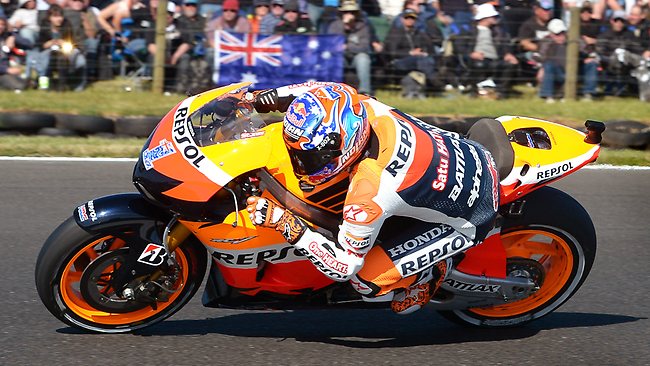 The Australian circuit is hoping that Casey Stoner will feature as a wildcard at his home race in October.

The two times MotoGP world champion famously quit MotoGP last season, but just after he won his sixth successive victory in Australia, with last year being his last victory in the sport.

However news of Stoner helping Honda test the new Honda RC213V has sparked rumours the Australian may feature in some races this year as a wildcard.

It’s something the owners of the Phillip Island circuit would entertain. “Honda had three bikes in their garage last year with [Andrea] Dovizioso – this year Casey might be that third rider,” chief executive Andrew Westacott told AAP.

“I’d love him to be there [at Phillip Island] and if he can make it down, we’d throw out the welcome mat.

“Now that he’s back on the bike from a Honda point of view, we’ll always look to have him down there – in the same way we’ve always extended the invitation to any of our previous legends.

“We’ll have some conversations over the next three months now that there’s a little bit more of a plan when it comes to Honda’s involvement.”

The circuit has admitted its struggled to re-create the hype of last years event, with the Australian public desperate to catch a glimpse of the man who dominated the Island for so long.

“Nothing can compare with last year. It was just one of those unbelievable Australian sporting moments,” he said.

“The one-off interest last year was great for the ongoing awareness of the event and ticket sales but it is a little bit more difficult (in 2013) because what we’ve got to do is promote how open the season is rather than having a hero.”

Last week Honda insisted that it was “out of the question” that Stoner could make a wildcard appearance either in Japan or Australia this season, however if there’s one thing we’ve learnt from Stoner, is nothing is out of the question. Just the prospect will wet the appetite of fans who coudl see the Marquez v Stoner showdown they crave.