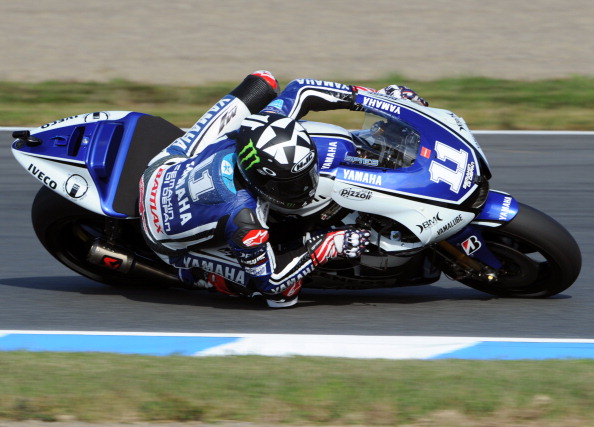 Ben Spies’ 2012 season is over. His shoulder injury picked up during yesterdays Malaysia MotoGP race in monsoon conditions was more serious than initially thought.

After falling at turn 7 in the race Ben went to the clinica mobile after initial complaints about pains in his shoulder. After a restless night, Ben went to the hospital in Kuala Lumpur. There they found that Ben had ligament injury in the right shoulder and a small fracture on the left rib may have also damaged his lung . He will be flying back to the United states tomorrow morning to have the ligaments in his shoulder stretched to rectify the shoulder problem.

Ben won’t be disappointed that the 2012 season is over for him, but it is a shame that a world superbike champion, MotoGP rookie of the season and MotoGP race winner, will end up leaving the factory Yamaha team after a season like this.

Ben must’ve done something seriously bad in the winter, that or walk under ladders, adopted black cats and break mirrors. Whether it was a broken chassis in Qatar, to brakes over-heating in Motegi. A visor misting up in the wet in Le Mans or his engine blowing up at home in Indy. What ever way you look at it, its been a season for the Texan to forget.

Hopefully with the surgery on his shoulder Ben will be back ready to fight and see if he can be the man that contributes to taming the Ducati.