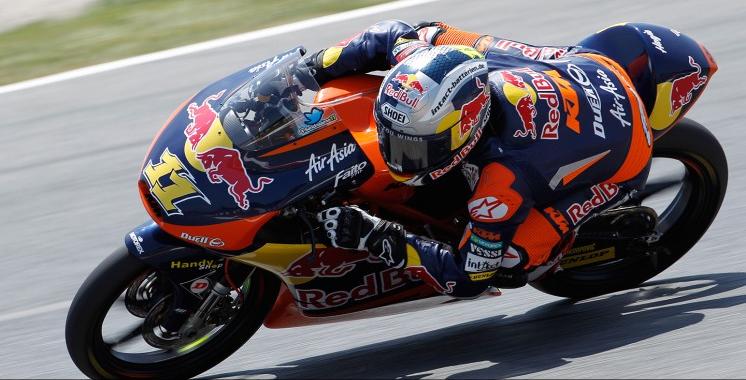 In his team mates back yard, Cortese today displayed his superior riding skills to be crowned world champion in style, with a win. And even when the storm clouds opened and rained on Sandro’s podium, it couldn’t damped the jubilation of the 22 year old.

His father’s Italian roots show through when you watch him ride. His smooth, elegant riding style means he is a pleasure to watch as he elegantly graces around a race track optimizing every aspect available. As well as his Italian roots, his Mother’s German roots add the stereotypical ruthless efficiency which guided him to the world championship this year.

Sandro is a charming, quiet young lad who wouldn’t hurt a fly away from the race track, but this year he showed he has now added the winning, killer instinct to his job, even if he only broke his duck last season in Brno, in his 109th start.

This seasons inaugural Moto3 season has been different for Sandro. He has shown his ability to win. That killer instinct, that fight, drive, desire. To turn 4th places into 3rds. In races where he fell, he had the grit, and the will to win to remount and gain substantial points.

He has always been an intelligent rider, but this season he hasn’t been afraid to combine his intelligence with some fairing bashing, getting his elbows out in the highly competitive Moto3 class, taking no prisoners, with arguably two of his best results coming at the expense of his team mates. A harsh move on Danny Kent in the final chicane at Assen and a block pass this weekend on team mate Khairuddin. Along with those he showed his race craft when forcing Viñales to crash on the final lap in Indy.

Whilst Jorge Lorenzo’s immense consistancy recieves many plaudits in the MotoGP class, Sandro has been having a season that even Jorge could be proud of. Podiums in all bar two races this season, including four wins. Of the two non podium results, one was in damp conditions in Le Mans, the other was the last lap collision in Motegi, both of which he has remounted for sixth places.

Before, and during the season everybody was raving about Viñales, and how it was his title to loose, and I am sure Maverick would argue the team has lost it for him, but that would be wrong. Sandro Cortese has won this, he beat Fenati, he has beaten Salom, and this season, he has just been too good for Viñales. Whilst some fans, namely those from Spain would argue that he isn’t the best rider, they are blinded by patriotism.
Alessandro Cortese is a fantastic, gracious Moto3 world champion, and I think I speak for everybody in the paddock when I say, congratulations Sandro, you fully deserve it and we can’t wait to see how you fair in Moto2 next season.