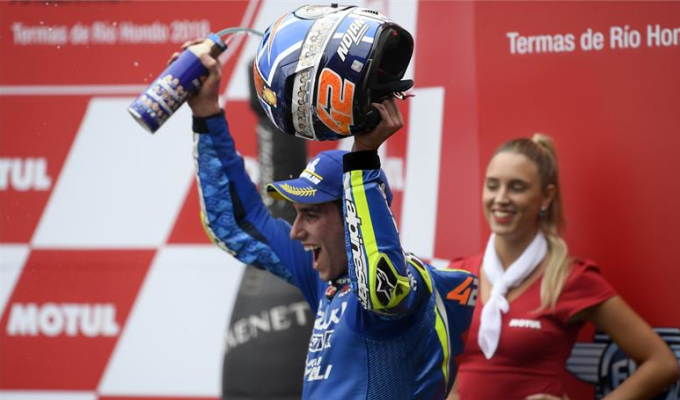 Alex Rins has extended his contract with the factory Suzuki teams for a further two-years the team confirmed in Le Mans.

The Spaniard had been in negotiations with the factory since very early in the season and after his debut podium in MotoGP back in Argentina is was a case of when, and not if, the deal got completed.

Joining Suzuki after Maverick Viñales moved to Yamaha, Rins suffered a slow rookie campaign with injuries holding him back every time he seemed to take a step forward on the GSX-RR. Continuing to adapt and adjust to the Suzuki has seen Rins’ extension one of the simplest ones this year.

“I’m very happy about this contract renewal. Even when I was still in Moto2, and I was planning to move to MotoGP, it was always the Suzuki project which looked brightest and most interesting in my eyes,” said the 22-year-old.

“My debut last year was complicated; there was my back injury in the 2016 Valencia test, then the ankle injury while training, and finally the arm injury in Austin. So after only two races we had already been through a very tough time, but I always felt the affection and support of Suzuki and the whole Team.

“We were able to turn the situation around through being patient, working hard, and being consistent, and finally this year we got the first podium together with my third place in Argentina.”

He continued: “But no matter the results, whether good or bad, the mood in the box has always been positive. The project that the Team have set up for me is fantastic, I can fully trust the capabilities of the Company and the Team when it comes to development and improvement, and I’m sure we can continue to aim for big results.

Team Manager Davide Brivio saw the future in a similar light to that of his young rider with progress continued this season before hoping to take a significant step forward this year.

“I’m very happy that we have been able to finalise the renewal of Alex’s contract for the 2019 and 2020 MotoGP seasons,” said Brivio.

“Alex is growing and improving fast, and knowing that we will have a long time together allows everybody to concentrate and work even harder to achieve important results with him.

“I’m glad that Alex was happy to stay with us, and I want to thank Alex’s crew and everyone in the Team, as well as all the staff in Japan for creating a nice environment where he feels he can continue to work well and grow. Now let’s carry on doing a great job with this exciting project together.”

With Rins’ future now tied up, all attention will now be on that of the second seat in the Suzuki factory. Management for Jorge Lorenzo have been speaking to Suzuki bosses as well as that of current rider Andrea Iannone as competition for places heat up.