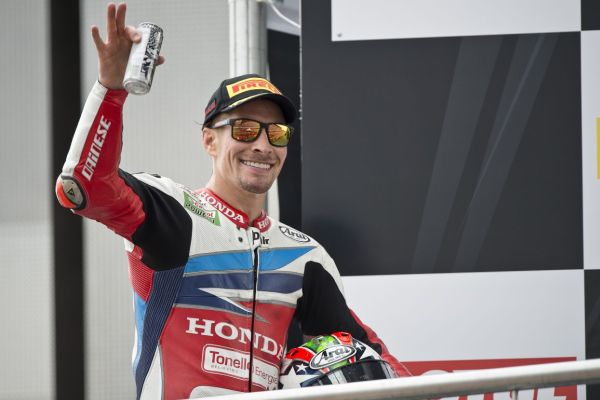 2006 MotoGP World Champion Nicky Hayden will make a shock return to the Repsol Honda team this weekend in Phillip Island, standing in for the injured Dani Pedrosa.

The Spaniard is back home after successful surgery on the broken collarbone he sustained during a huge free practice high-side during last weekends Japanese Grand Prix at Motegi. He was flown home and had surgery back in Barcelona to repair the broken bone.

Pedrosa was replaced with Honda test rider Hiro Aoyama in Motegi, but in Australia, Honda have recruited the services of Nicky Hayden.

The Honda World Superbike star won the 2006 MotoGP World Championship with the Repsol Honda team, before leaving for Ducati at the end of 2008. Hayden stood in for Jack Miller as part of the Marc VDS team in Aragon last month, and is excited to return to his ‘old dream team’.

“First of all my best wishes to Dani, I’m sure he will come back stronger than ever like he always does,” said ‘the Kentucky Kid’.

“For me it’s crazy hard work but it’s a chance, ten year after winning my world title, to get back to my old “dream team”! Doing a week-end in Phillip Island on a factory Honda, it’s pretty emotional for me to even think about it, and I’m very grateful for this opportunity and the trust that Honda gives me.

“I want also to thank my current team for allowing me to go and do this, and the sponsors. Everybody worked a lot on every detail to make it possible for me so now I’m excited to get on a plane, to get down to Phillip Island and hopefully I can do a good job for the team.

“Regarding Phillip Island there are two things to always consider, the weather and the tyres but it’s a track I love and I can’t wait to ride the bike there. Let’s get started on Friday morning and go forward.”

Hayden won’t be able to stand in for Pedrosa next weekend in Malaysia as he will be back on World Superbike duty, with the honour expected to fall upon Aoyama once again.

One thought on “Nicky Hayden to replace Pedrosa at Phillip Island”