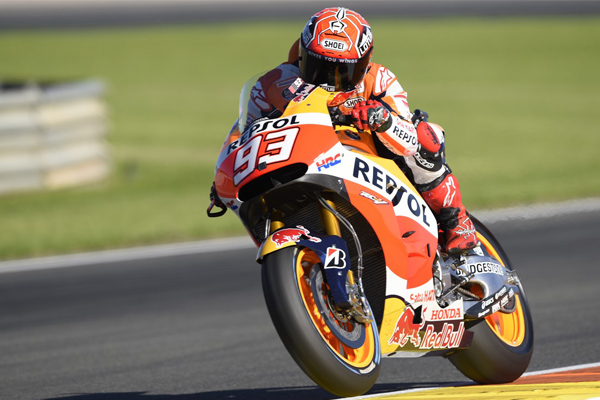 Vice President of the Honda Racing Corporation Shuhei Nakamoto has comes out in defence of Marc Marquez and Honda after Valentino Rossi’s latest claims against the pair.

Rossi was once again unhappy with the way in which Marc Marquez rode in Valencia, claiming that the Spaniard rode like Lorenzo’s bodyguard, to ensure that he would win the 2015 MotoGP World Championship at the expense of the Italian. It comes just two weeks after Rossi’s initial claims in Sepang that Marquez was trying to hamper Rossi’s title chances as retribution for clashes in Argentina and Assen.

The Italian also questioned Honda’s stance on the situation, wondering why they would allow one of their riders to hamper his teammate and allow a Yamaha to win.

Nakamoto said that all of Rossi’s claims are opinions of one man, and there an no facts to back up the accusations he is making.

“This is not the atmosphere we wanted to experience at the end of an unforgettable championship,” said Nakamoto.

“We understand that it’s been a very difficult day for Valentino, after leading the championship for 17 races and losing by just five points in the final race must be very disappointing.

“However, on the other side we cannot accept the strong accusations he has directed against our rider and Honda in the past weeks and in today’s post race press conference. Together with the allegation he made after Phillip Island, there is no evidence to support these accusations, only the fact that Marc took five points away from Valentino’s competitor in the championship, Jorge.

“Today Valentino has alleged that Marc never attempted to pass Jorge, who has clearly had a very good pace all weekend which he demonstrated by taking a strong pole position in qualifying. Marc was struggling to stay behind him during the race and both him and Dani have done a great job to not lose too much distance to Jorge.

“Marc’s plan was to attack in the last lap, as we have seen many times in the past if the opportunity presents itself, he will try. Dani’s pace increased at the end of the race and he overtook Marc but ran wide and Marc was able to immediately pass him back, but this is racing.

“We are sorry that Valentino doesn’t believe this is the case, but we are certain both Marc and Dani were pushing 100% to achieve the best result for the Repsol Honda Team and all our partners as always. We cannot accept that these accusations continue to surface time after time, as this is the perception of one person – which we respect – but it is not the reality.”

Whilst clearly respecting Rossi, Nakamoto hopes that once everybody has calmed down, Rossi will be able to reevaluate his claims, and appreciate what a fine season it has been.

“Valentino is a great champion and clearly an intelligent individual so we truly hope that in time, once the dust settles, he can reevaluate what has happened and accept this was another great race from a wonderful season, and it’s a shame to spoil it. Marc and Dani have taken points away from both Valentino and Jorge this year, this is the nature of racing.”

2 thoughts on “Nakamoto comes out in defence of Marquez”