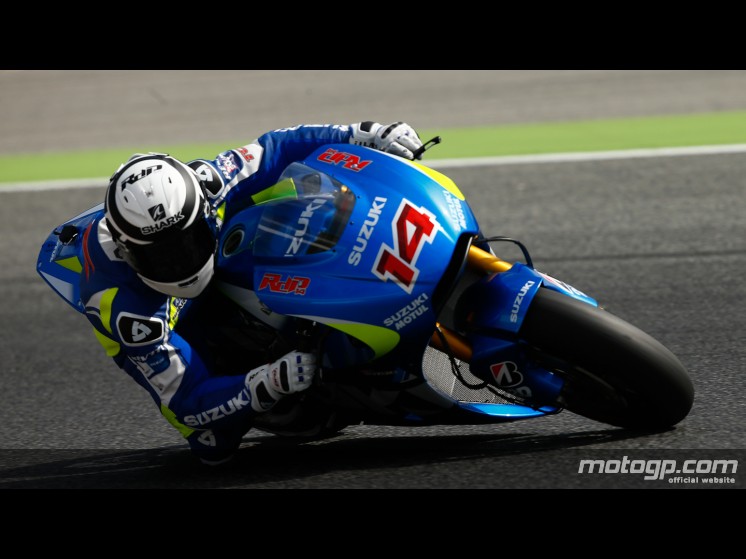 Jorge Lorenzo was the fastest rider today in Catalunya aboard his Yamaha M1, although all eyes were on another Japanese factory in blue, as Suzuki made their long awaited European MotoGP return.

After his quite sublime victory yesterday, Jorge Lorenzo was once again the man to beat, as he finished the day top of the time sheets.

The World Champion was on track trying out a revised fuel tank and a frame update, and he posted his best lap, a 1:41.904, towards the end of the day in the middle of a trademark Lorenzo run.

Lorenzo’s time was faster than any lap in yesterdays race, and around four tenths slower than his Q2 lap.

Valentino Rossi couldn’t match the times of his team mate, and ended the day in sixth position, 0.609 seconds slower than the Spaniard.

The Doctor also suffered a crash at turn three at around 16:00 local time, which bought out red flags, however Rossi was unharmed and made his way back to the pits. Rossi was working on race pace with a full tank, in an effort to improve his early race pace, and he also tested the new Bridgestone rear tyre.

Nicky Hayden was the surprise of the day, as he ended the test day in second postion aboard the Ducati GP13 and not the ‘lab bike’, and just 0.051 seconds from Jorge Lorenzo.

Andrea Dovizioso found himself behind his team mate again, as both Ducati riders used the test day as a chance to once again compare the differences between the GP13 and the new lab bike that was testing in Mugello last week.

With the absent Repsol Honda riders already heading to Aragon, and no Gresini team there, Stefan Bradl was the only man there representing the Japanese brand, and Bradl did well.

Sitting at the top of the standings for a large portion of the day, before eventually ending in third position, it was a posative test for the LCR Honda man as he continues to build his confidence.

Cal Crutchlow got back on his Yamaha M1 and the Brit tested a chassis update from Yamaha, as the Japanese brand aim to please Cal with the hope of keeping him in 2014.

Teammate Bradley Smith only rode in the morning before heading to Quiron Dexeus University Hospital, where he underwent a skin graft operation on his little finger.

But it was Suzuki who most people were keen to look at. After news yesterday that they won’t be returning until 2015, Randy De Puniet and Nobuastu Aoki were in action for Suzuki again.

The Frenchman posted a lap time of 1:42.676, which was just three quaters of a second from the fastest time of the day (although still slower than his team mate Aleix Espargaro on the Aspar ART) but the Frenchman was happy with the first day in Barcelona.

“I am satisfied because the first test at Motegi was quite good and now we are at a GP track, with most of the other riders and running in the same conditions,” explained De Puniet.

“I think we did a great job because I’m only seven tenths slower than the best lap time today and after only 50 or 60 laps; all of the other riders have already been here for three days. I am satisfied, but think we could be even faster if we had one more day.

“Anyway, it’s a good start because we now go to Aragon for a two-day test, so I really hope to do the same job and have the same feeling with the bike.”

This busy week of testing will continue tomorrow when the Repsol Honda Team begins testing at MotorLand Aragon, where it will be joined by Yamaha and Suzuki from Wednesday.