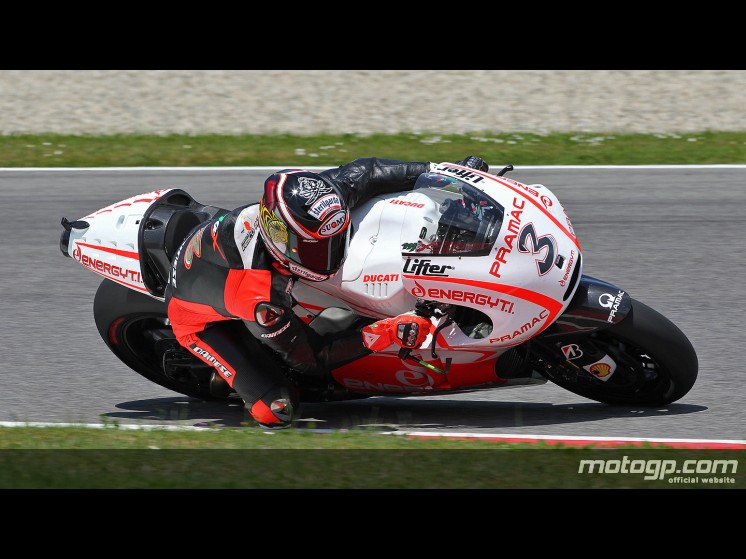 Since the announcement that Biaggi would return to MotoGP to test Ben Spies’ Pramac Ducati on Tuesday, the world has been waiting to see the former GP star back on track.

Now the Roman Emperor is back on track, and the first times and images have come from the Tuscan hills.

With sun drenching the fabulous Mugello circuit, Biaggi hoped aboard the vacant GP13, and headed out to do some laps of the circuit he hasn’t lapped at since 2005.

With his trademark number three on the front and Energy T.I sponsorship (Iannone’s sponsor, despite using Spies’ bikes which are sponsored by Ignite) Biaggi took to the track around mid morning local time to set about his test.

Early times coming from Mugello were that Biaggi posted a lap at 1’49.7, just 0.5 of a second behind Iannone’s qualifying time from Saturday seemed staggering. However with no official timings, a 1’49.7 with a manual stopwatch, on a bike, tyres and brakes he hasn’t used before just seemed a little far-fetched.

Later times coming from Italian journalists suggested that Biaggi was running close to the 1’54 mark, which seems much more feasible, after 5 to 10 laps.

Biaggi had said to comment on the difficulty of the carbon brakes, that were banned in World Superbikes.

Andrea Iannone is also in action, and has already bettered his qualifying time from Saturday on his first run out on the Ducati “lab” bike.

Ducati CEO Bernhard Gobmeier said: “Biaggi has asked us if he could test our MotoGP machine again. Now the opportunity has arisen because Spies is injured. So we have kept our promises.”

Unfortunately Biaggi, and Ducati’s day was cut short after rain rolled across the Tuscan hills and drenched the track.

After an encouraging it was frustrating for fans and riders a like to have the weather put pay to the first day of testing. Fortunately, we get to do it all over again tomorrow as the Ducati’s and Biaggi are back on track.