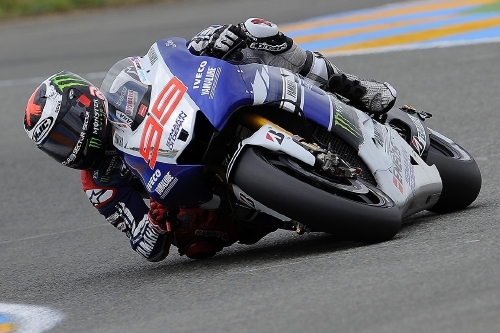 World Champion Jorge Lorenzo is already half way through his allocation of engines for the 2013 season, just four races into the season!

As part of cost cutting measures, Dorna introduced a limit on the amount of engines being used by teams per season.Last season it was six engines per prototype machine (CRT machines are allowed 12), this year it was reduced to five per team prototype team.

There had been some rumours that defending world champion Jorge Lorenzo had already had one of his five engines written off, however Lorenzo’s team manager Wilko Zeelenberg denied these rumours.

“No,” said the Dutchman when asked about the rumours. “But all the Yamaha riders have switched to race at Le Mans on their third engine.”

Engine preservation isn’t something new to Lorenzo, after last season. During the Dutch TT at Assen the Spaniard was skittled at the first corner by Alvaro Bautista, causing the throttle to stick in the gravel and blow one of Lorenzo’s engines up.

Whilst none of the engines have been written off, and are all still in use, it is still remarkable to know that in the opening four rounds the Factory Yamaha team have used three of their allocated five engines.

With only two fresh engines for the remaining 14 races of the season, and the busy European schedule ahead, it will undoubtedly be hard work for the Yamaha mechanics.