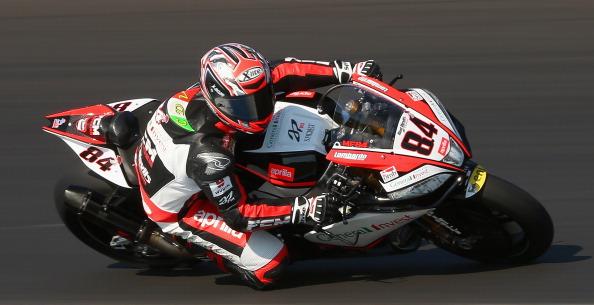 Italian world Superbike rider Michel Fabrizio this weekend will run a special fairing showing his support for two Italian soldiers currently facing murder charges in India, during the second round of the World Superbike championship.

The Red Devils Superbike team in agreement with their sponsor General Invest, will be displaying a special support message for the two Italian marine officers that are facing murder charges in India.

Massimiliano Latorre and Salvatore Girone are the two marines who are currently being charged with the murder of two fisherman last year when they were part of a military security team protecting a tanker from piracy, which has resulted in an intense, diplomatic and legal row over jurisdiction (Italy’s Foreign Minister resigned over his government’s decision to return the two marines to India).

“Vi aspettiamo a casa” is the message which will be displayed on the Red Devils Aprilia this weekend, and translates to “we are waiting for you at home”.

The Red Devils team have had to be very careful of the situation currently in India, and the team insist it is not a political stand against India with the Budah circuit hosting the first ever Indian SBK round later this year. Instead the team claim it is a message of affection for the two marines and their families.