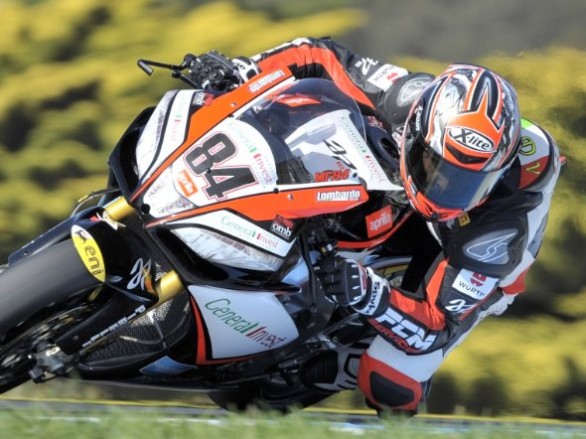 Michel Fabrizio was the fastest rider on his Red Devils Roma Aprilia RSV4 during the first day of the 2013 World Superbike season at Phillip Island.

The Italian who has moved from a BMW from last season, and impressed pre season at a track he is fond off, posted a best lap of 1’31″317, just 0.075s ahead of Aprilia Factory Racing’s Eugene Laverty.

The Irishman was focusing on longer runs during his pre season test at Phillip Island this week, and now the racing matters he has turned up the heat, making it an Aprilia one-two.

In third place was Marco Melandri as he continued to battle his shoulder pains on his BMW.

Melandri was only just over two tenths from first position, and he worked on his race pace for Sunday for most the session.

Leon Camier was fourth fastest but wasn’t as comfortable as he was during testing earlier in the week. Just behind Camier was a trio of his fellow countryman, Chaz Davies, Leon Haslam and Kawasaki’s injured Tom Sykes all covered in less than half of a second as they finished fifth, sixth and seventh respectively.

Althea’s Davide Giugliano was seventh fastest as he also learned the Aprilia, and he was just ahead of Factory Racing’s Sylvain Guintoli.

Jonathan Rea closed out the top ten, and was just 0.567 seconds behind the fastest time of the day up keeping with the highly competitive SBK reputation.

Carlos Checa, finished the day twelfth, although he was only able to complete a handful of laps due to a crash earlier in the day that beat him up a bit, fortunately it was only bruising after the crash.

The 15 riders that have made it through to tomorrow’s Superpole shootout were covered by a remarkable 1.18 seconds.

The other four riders who “made the cut” are Max Neukirchner, Loris Baz and Australian wild card duo Jamie Stauffer and Glenn Allerton.