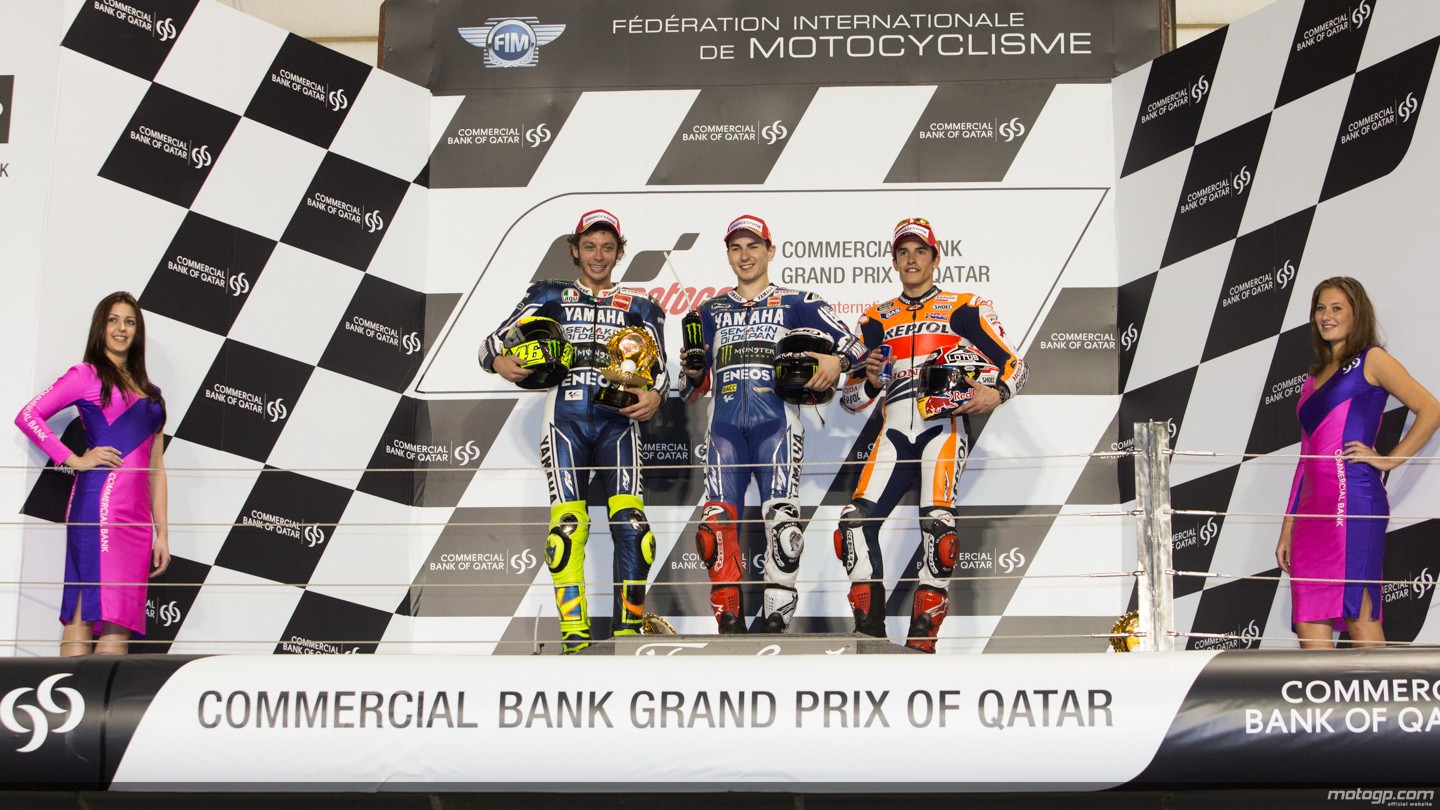 MotoGP World Champion Jorge Lorenzo dominated the opening round of the MotoGP season from start to finish in Qatar, laying down a marker to his team mate and the Repsol Honda duo.

The returning Valentino Rossi and MotoGP rookie Marc Marquez rounded off the podium with three big smiles in Qatar.

Lorenzo started from the pole, and took the whole shot leading into the first corner, once Pedrosa was in second place Lorenzo rode off into the Qatari night.

Lapping constantly in the middle 1.55’s, he edged away from Pedrosa, Marquez and Rossi who were in the second place, and even after he started “coasting” to the line, he was still in the 1.56’s with 12 laps left, and still managed to win the race with a highly comfortable 5.990 second margin.

It was a race the world champion admitted he was nervous heading into.

“Half an hour before the race I felt a little bit nervous so I had to really concentrate and relax on the grid'” said Lorenzo.

“I knew it was going to be difficult to open a gap but I had to try, I made a good start and pushed more than 100%. In the beginning it was hard to open the gap as Pedrosa didn’t want to let me get away, he tried to stay with me but after six or seven laps I opened the gap which made me more confident to keep my pace.

“I’m very happy for Yamaha and happy for Valentino as he has now passed two difficult years.”

Despite the dominance from Lorenzo, it was his team mate who will steal the headlines again.

Starting from seventh on the grid Rossi knew he had it all to do, and after an agressive first lap, and working his way through the grid, a mistake on the first corner of the second lap which saw him relegated to seventh position.

Seeing Lorenzo race away, Rossi immediately tried a pass the Desmosedici of Andrea Dovizioso, but was forced to hang on to the brakes, and as a result he ran straight on and lost three spots in the process, meaning all his hard work was lost.

Rossi working his way back through the field took seven laps to pass Stefan Bradl, who was hard on the brakes, but he was finally able to pass the LCR, HRC backed Honda. Bradl would try and stay on the back wheel of Rossi, but the young German would crash out two laps later.

Posting fastest lap after fastest lap Rossi caught Crutchlow who was running in fourth position, and right on the tail of a pair of Repsol Honda’s, and passed him with relative ease. Crutchlow would try and fight back, but the Brit ran on at the first corner. Crutchlow rejoined comfortably in fifth, but it was the end od his podium hunt

After stalking his team mate for the majority of the race, the young Spanish apprentice Marc Marquez took second spot from his team mate at the end of the straight. It was unclear if the rookie was on edge staying with his team mate, or if he was just sat comfortably biding his time, but he deemed the arrival of Rossi as the perfect time to get past.

With just four laps to go the Italian went up the inside of Marquez to claim second position, but he couldn’t drop the rookie like he could Pedrosa.

The rookie reclaimed second position from the doctor at the start of the penultimate lap, breaking earlier and slipping up the inside of Rossi, but it was only three corners later in which Rossi re-passed the Spaniard, and this time the rookie couldn’t fight back and the Italian would finish just 0.2s ahead of Marquez.

Rossi had ridden his M1 so hard that on the cool down lap he was forced to leave it by the side of the track, and hitch a lift back by his good friend Andrea Iannone, and somewhat ironically on a Ducati.

Alvaro Bautista was fairly anonymous in the race as he battled with broken fingers from the testing crash to finish sixth, and just ahead of the impressive factory Ducati of Andrea Dovizioso , and was the first of a group of Ducati riders, Nicky Hayden, Andrea Iannone and Ben Spies who completed the top ten.