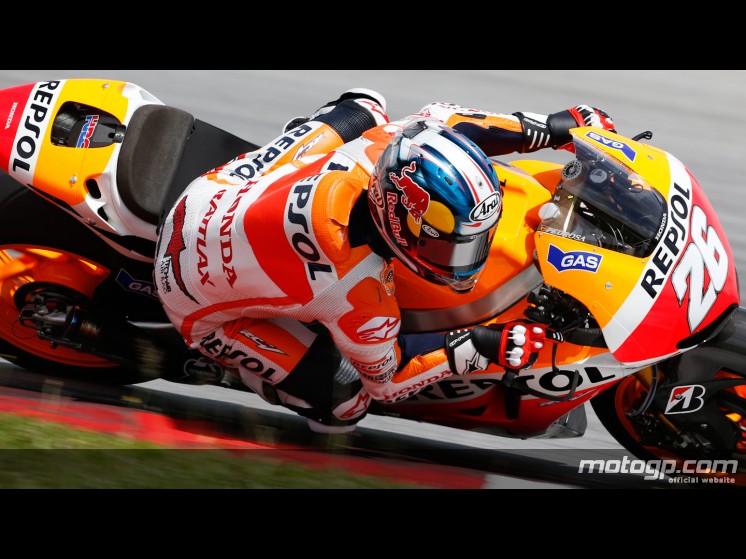 Dani Pedrosa was once again the fastest man during day one of the second MotoGP pre season test in Sepang, on a day where the weather had the ultimate say and brought the day to a premature end.

“We tested a few things on the suspension and also mapping,” explained Pedrosa.

“It was harder at the beginning because the track was a little dirty – I guess from yesterday and beforehand when we had heavy rain. But, bit by bit, the track was improving so I guess from tomorrow we should be able to continue with the same things: the suspension and the mapping for corner entry, that’s basically our plan. Hopefully we will also get a long run in.”

Lorenzo was just a little more than two tenths of second adrift of Pedrosa, as he continued to work on race set up and persisted on working on longer consistent runs.

Getting through 25 laps the World champion said, “Not so much new stuff today, we just tried to improve our current settings. We made some modifications but nothing special. For the next two days, more of the same!

“We need to improve the acceleration a little bit but for the moment no new bits to try. The track was more slippery than the first test due to the rain which has left the tarmac in a worse condition.”

Marc Marquez continued to impress and he finished the day in third position. Despite the impressive times, Marquez did suffer a small crash with his RC213V, but it was so minor he remounted and rode it back to the pits.

“I’d done a lot of laps on that set of tyres and then got to the slowest corner on the circuit,” said a smiling Marquez.

The surprise and star of the day was young German Stefan Bradl. The LCR Honda rider was fourth position, and only 0.017s from the fully factory supported Marquez.

“The track was a bit slippery, so conditions were not as good as they had been for the last Sepang test,” the German explained.

“It took some time to get up to speed for a proper lap time and then it still took me some time to build confidence when we fitted new tyres.

“By the end of our running we had found ourselves in a good position, so that was good. We still have some things to try in terms of geometry and lifting the bike and I also suffered a bit today with braking – it wasn’t as stable as at the last test.”

Valentino Rossi continues his re-adaption onto the Yamaha M1, and even reverted to the 2012 machine in an effort to get himself reacquainted with the Yamaha. The doctor found himself four tenths off the pace, a similar margin to the first test, and ended the day in fifth position.

“The first day is not so bad, but we were unlucky because we had a small problem with the bike which had the new chassis so we had to stop and use the old bike,” said the Doctor.

“We made some tests with that using just one tyre and my pace and my lap times were not so bad. After we waited for the afternoon for the real work but the rain came so we decided to stop continue tomorrow. If it rains again tomorrow we will do some laps in the wet conditions.”

In sixth position was Briton and Yamaha satellite rider Cal Crutchlow, and he  continues to impress on his Tech3 M1.

Crutchlow was approximately one and a half seconds off his best time from Sepang’s first test so the Brit wasn’t too disheartened.

Right behind Crutchlow was Gresini Go & Fun rider Alvaro Bautista, who is continuing development and the learning process with his Showa suspension. He was also the final rider to be within a second of Pedrosa’s best time.

Up next was the factory Ducati duo of Andrea Doviziso and Nicky Hayden who were eighth and ninth respectively, as they worked with a new fuel tank for the first time in an effort to improve weight distribution.

The pair improved on their gap to the top from the first Sepang test, with Andrea Doviziso 1.2 seconds adrift whilst his team mate was a further three tenths adrift.

Rounding out the top ten was Tech3’s MotoGP rookie Bradley Smith. Smith suffered his first crash on the Yamaha M1, although the Brit was unharmed much like his fellow rookie.

Aleix Espargaro was just behind Yamaha test rider Katsuyuki Nakasuga as he ended the day twelfth fastest, and was the third victim of the dirty track as he also crashed his Aspar ART machine.

Ducati Pramac duo Ben Spies and Andrea Iannone, were also paired together and separated by just 0.003s as they were twelfth and thirteenth fastest.

Hiro Aoyama impressed on his Avintia CRT machine as he was 17th fastest, and  faster than Randy De Puniet, Colin Edwards and his team mate Hector Barbera.

Michael Laverty was forced to sit out the first days test and his new PBM machine is not track ready, and the team are still dialling in the Magneti Marelli electronics.