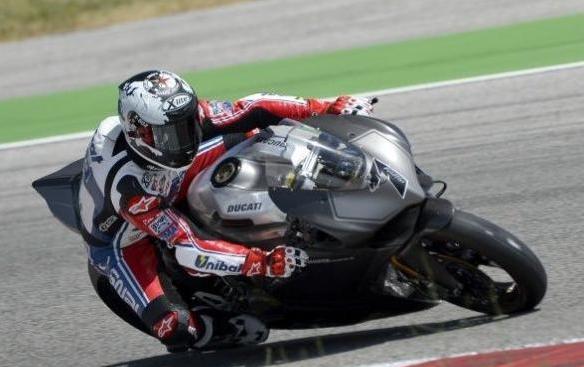 The 2011 World Champion aboard his 1198 Ducati has been testing his new machine in Spain and knows there’s work to be done.

“It has been a very positive test. I’ve drawn some good conclusions, identifying the critical points of this motorcycle chassis level. I was able to transfer my instructions clearly, now it’s up to the engineers. I’m pretty sure they found what is now missing.” said Checa

When questioned about the engine inside the 1199 the Spaniard said “The motor? I wish it were more manageable, we also lack a bit of power up top. Jerez is a circuit linking, horsepower doesn’t matter as much, but even here it shows that we lack a bit. ”

Ducati made the Panigale last year and was dubbed as the best superbike ever to be made, a slow introduction into the world racing scene was planned to iron any initial flaws out, and now it has to be made a race winner.

Test times from Jerez show that the Panigale was around 1.4 seconds a lap slower than that of the Aprilia or Kawasaki and around a second behind the BMW’s, but this doesn’t worry the team.

Sant Fruitós said “We must be calm. Compared with the first outing that we did come very close. We must not forget that at this time Superbike has a very high level. Aprilia have run since 2009, the Kawasaki is in its fourth year and BMW it’s fifth. We start now, not only with a new bike, but with a totally different concept. So I am optimistic.”

Despite the changing of the team from Althea to Alstare most of the team around Checa has remained the same.

Checa will be hoping that at Phillip Island, notoriously a Ducati circuit, and a track in which he won last year, he can find the set up and get his SBK title challenge off in the perfect way.