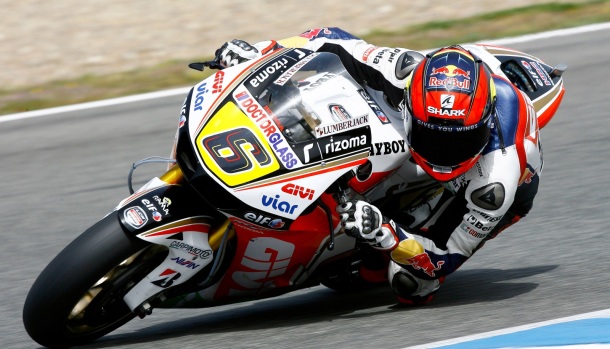 MotoGP 2012 rookie of the season Stefan Bradl will not be travelling to Sepang this weekend to test the Honda MotoGP 2013 RC213V due to arm pump issues.

It was understood that Bradl would partner 2012 Moto2 World Champion Marc Marquez and Alvaro Bautista to Sepang, but it appears an injury will be holding Stefan back.

In an interview with French media Christophe Bourguignon, Bradl’s chief engineer at LCR Honda, and when asked about the up coming test he said “During the season, Stefan had suffered repeatedly compartment syndrome and the Thursday following the Grand Prix of Valencia, we conducted tests specifically focused on his forearm. We understood that it was better to make it operate during the winter. It will be next Monday at Dr. Mir in Barcelona and therefore it can not perform the tests in Malaysia.”

So in Lehman’s terms Bradl has suffered from arm pump. Slightly strange that Bourguignon says the surgery will take place next Monday with Bradl scheduled to be at Motorcycle live in Birmingham. Either that or the surgery is due for 3rd December.

Whilst a blow for Bradl to miss out on yet more testing time, ensuring he is fit for 2013 when his factory support commences will be essential for the German in his second season in MotoGP.