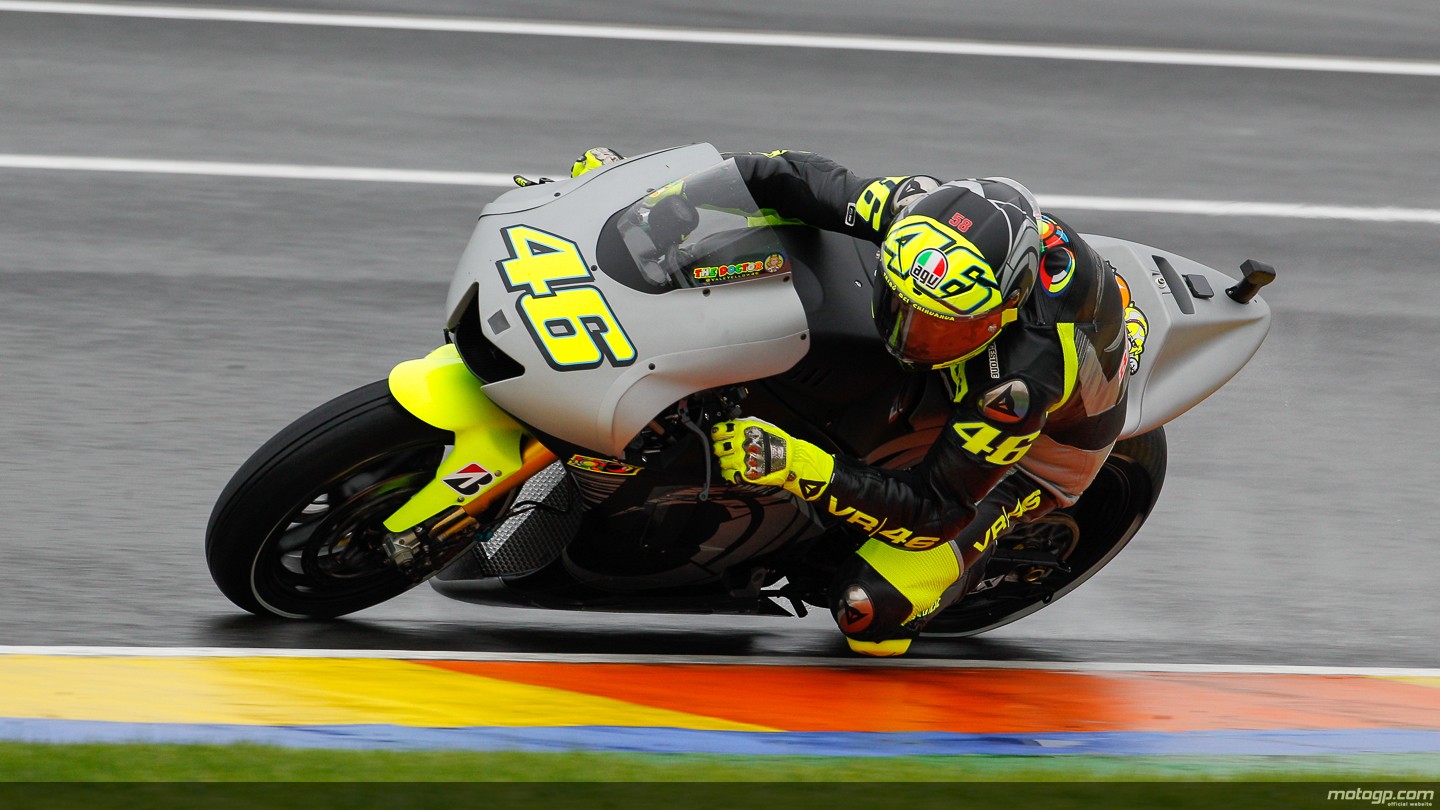 Tuesday morning the motorcycle world stopped. As the garaged doors flung over a certain number 46 was mounted back on the front of a Yamaha M1 for the first time since 2010.

Despite the difficult wet conditions, the nine time World Champion found himself like a MotoGP rookie, desperate to get abord the 2013 Yamaha M1. The media buzz gathered outside the Yamaha Factory Racing garage, as unusually early, Rossi emerged from his pit box.

The M1 was fired and warmed up, as journalists and photographers went mental trying to catch a glimpse of what was unfolding. The trademark day-glow yellow was on his Dainese leathers and he crouched holding his right foot peg which has become so synonymous with the Greatest Of All Time.

But this was special. After an emotional “bye bye” to his “baby” at the same circuit two years earlier he was back, talking to his “baby” except this time it wasn’t his baby it was Lorenzo’s.

Despite the tricky conditions everybody was desperate to see how he would perform, has he still got it? Or was his time on the Ducati crippling to him and proved to be the end of him?

Well in face of the conditions, after the first mornings testing (Yamaha left at lunch time and moved up to Aragon for day 2 of testing, which was incidentally rained off without a lap put in by Rossi) Valentino found himself posting a time of 1:43.736 completing 28 laps, an amount which was only bettered by Michele Pirro and Hector Barbera who had a whole day testing.

After the first morning when asked about the new M1, Rossi said “It’s more powerful (than the 2010 bike) obviously as a 1000cc bike, but the rest is fundamentally the same. Testing in the dry would have been important, it’s a shame we had bad weather.It’s a shame because I had a great desire to do a good test and try the bike in order to understand exactly what we needed for next year … Unfortunately we have to wait until February. [Joking about the change since he was last on the Yamaha in 2010] It has changed because it is a 1000 and has more power, the rest hasn’t changed.”

Whilst the test didn’t give us a chance to see exactly what kinda pace Rossi will be running in 2013, it certainly was exciting to see him back on a bike capable of winning races next season.

See below to catch his first run from MotoGP.com on his Yamaha M1.