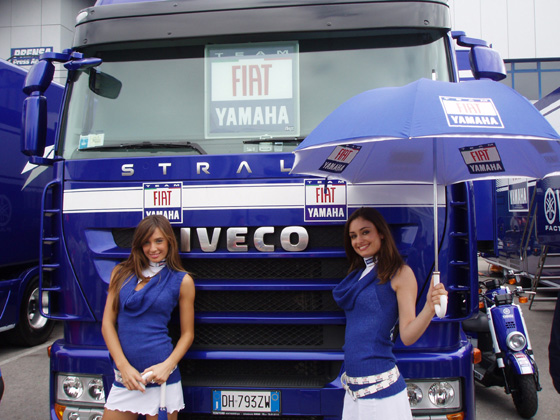 Yamaha Factory Racing has renewed their sponsorship with  truck manufacturer IVECO for a sixth year.

For the final five rounds of last season, Yamaha had the IVECO logo on the tail of their bikes, and for 2013 it will go further, and it will now be seen on the leathers, and team equipment of both Jorge Lorenzo and Valentino Rossi.

“As an important partner for Yamaha Factory Racing, this is a very welcome continuation of a collaboration started in 2008,” says Lin Jarvis.

“We have won four World Titles together with IVECO; we are looking forward to, not only a great season ahead together in 2013, but also to strengthening the relationship with IVECO through a number of initiatives at GP circuits and also away from race weekends.”

“This initiative is a great opportunity for IVECO to increase its global visibility, while communicating our involvement and enthusiasm in the world of sport,” adds Alberto Cavaggioni, Marketing Director of Iveco S.p.A.

Despite Yamaha not having a title sponsor, it is further evidence of the marketability of the returning nine times world champion Valentino Rossi.