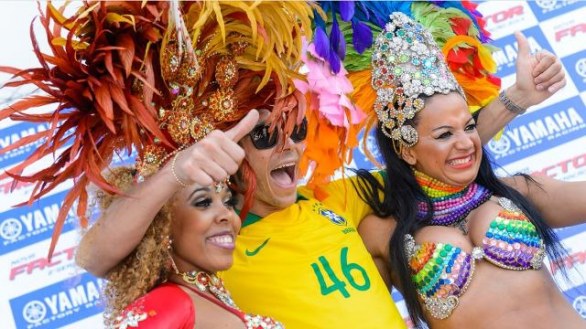 This will be a clever marketing tool from Yamaha who currently only own 9.66% of the Brazilian market – Honda who enjoys a whopping 80.29% share (Honda sold 1.63 million motorcycles in Brazil in 2011) so having the marketing superstar Valentino Rossi will undoubtedly help in the future.

The nine-time MotoGP World Champion surprised employees of Yamaha Brazil, based in Sao Paulo, when he appeared dressed in a Brazilian football shirt, with of course the number 46 on it.

After a meet and greet with employees he went on to a photo-shoot to launch the new 125cc bike before attending a press conference for the eager Brazilian media.

The Yamaha rider also took a helicopter ride from Sao Paulo to the Città Velo circuit,  where he rode a Yamaha YZF-R1 with a group of 300 local Yamaha dealers and customers.

“It’s a great pleasure to be back in Brazil after so many year,” said Rossi in the press conference  “I still have good memories of the GPs I rode here. Brazilians are really special and their passion and enthusiasm is contagious!

“They also managed to make me dance Samba in public! I would like to thank President Hayakawa and Yamaha Motor Brazil for their invitation. I was happy to take the occasion of the test in Austin to come here to promote Yamaha and the new Factor 125cc, which YMDB is betting a lot on to give a further push to their business. I am really looking forward to coming here again soon, hopefully for a MotoGP race!

“Brazilians deserve a race here, as their passion for MotoGP is without equal! Now I will just have time to drink a coffee at home and then I will be heading to Jerez for the final winter test.

“The test in Austin was bitter-sweet for us and I am looking forward to testing in Jerez to confirm the positives we have found so far and to try to improve in the areas where we are still struggling.”

Shigeo Hayakawa President, Yamaha Motor do Brazil said: “Firstly I would like to thank Valentino and Yamaha Factory Racing for coming to Brazil to join our event and product launch.

“I was so surprised to find so many fanatic fans of Valentino, especially as he has not come to Brazil for 10 years. He visited our office and joined me in the canteen and, although I knew him, I was again very surprised to see how ‘easy’ he was.

“Brazil is now in its second stage of its motorcycle culture and our sales will be positively affected by Valentino’s visit. I hope that Valentino will open further that business-door for Yamaha. I truly hope that MotoGP will come to Brazil because Brazilian fans and media are so fanatic for the Championship!

Rossi will fly back to Europe to partake in Yamaha’s team launch on the 22nd March, and he will stay on for the three day official IRTA test at the Jerez de la Frontera circuit in Spain from March 23 to the 25th.