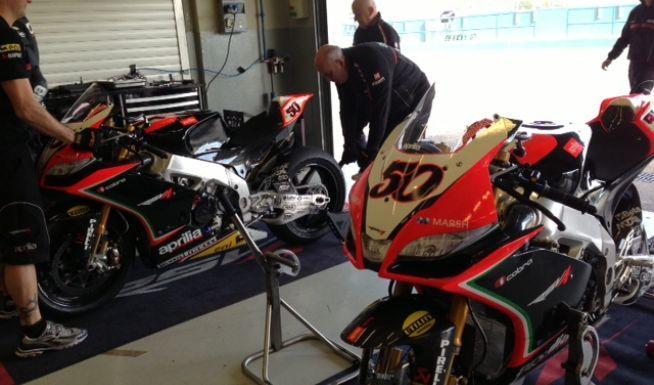 Sylvain Guintoli put himself back in the forefront of racing fans minds with a superb 2012 season, and he is hoping for an even stronger 2013.

The popular Frenchman won three races in last seasons SBK championship despite a team switch half way through the season from the Effenbert Liberty Ducati to the Pata Racing Aprilia.

Guinters as he is known, had signed a pre agreement for FIXI Cresent Suzuki for 2013, but when rumours started surfacing that he was the man Aprilia wanted should new World Champion Max Biaggi decide to call it a day, Guintoli took a risk, and terminated his contract with Cresent Suzuki hoping for the factory ride.

Luckily for Guinters, Biaggi retired, the call came, and he is a factory rider for 2013. “It is really exciting and it was a bit of gamble but it was definitely 100% the right thing to do,” said Guintoli.

“There is still a difference between riding as a privateer or as a factory rider,” said Guintoli. “The aim is to go and fight for the championship. There is a lot of work to do and there is another big step to do, but to make that step you need the right bike and the right team. The bike and team I am going to be working with next year is definitely going to be the right one.”

Guinters continued “I have full faith on them giving me everything I need to be in the front. That is what matters to me. That is what I want; I am ready for it. All I want is to challenge and I want to get on track knowing that I am fighting for the wins.”

Guintoli knows it wont be easy to fill the void left by the Roman Emperor who guided the factory to two WSBK crowns in 4 years since they joined the series in 2009.

Guintoli doesn’t know any of his crew for next season or even if Aligi Deganello will be his crew chief, but he is putting total faith in Gigi dall’Igna’s decision, “I trusted 100% what Luigi Dall’Igna is choosing to do because he knows what riders need and he knows what is going on.”

“This crew I am working with now, the crew that Max had last year knows the bike very well and knows how to work it. They have the right reflexes already. You can tell because they do not even need to speak to each other when there is something to do on the bike, they just know. This is part of winning. I am giving Aprilia 100% trust and 100% regarding this because they know better than I do. I know what to do on track and they know how to make me do it right.”

In the recent Jerez test, Guintoli was around half a second off team mate Eugine Laverty, and will be hoping to challenge his team mate, and be at the sharp end of the 2013 SBK standings.