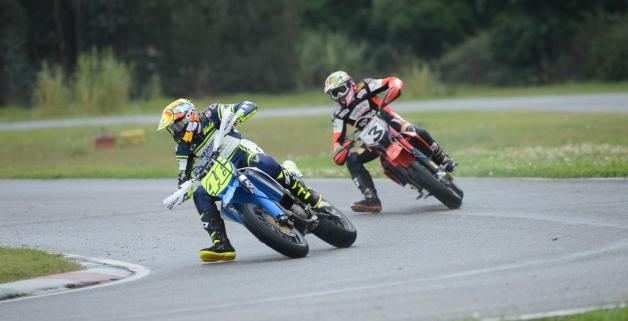 Dovi was one of Marco Simoncelli’s biggest rivals on the track, right up from the age of mini moto’s, so it was somewhat fitting that he was the first man to win the charity event was his biggest rival.

The distance of the race was 58 laps, of course the number of the man himself, and Dovi was the first man across the line.

Half a second behind Dovi was pole sitter Cristian Iddon as he crossed the line second, and fan favorite and close friend to Super Sic was Valentino Rossi.

Speaking after the event, Dovi said,  “They were two fantastic days. Marco was very popular, and he will remain popular because of the important legacy he leaves behind.  Unfortunately there is nothing more we can do for him, but at least we can help his foundation.”

Many fans were hoping to see one final battle between Valentino Rossi and Max Biaggi as the Roman Emperor has called it a day after claiming his second World Superbike title in 2012.

Unfortunately the battle royal all race fans were hoping for never materialized, despite a brief dice in the middle of the race, but Biaggi couldn’t stick with The Doctor and eventually crossed the line in 8th position.

The weekend was a resounding success, and least we forget the purpose of the weekend, to raise the funds for the Simoncelli Foundation.

The aim of the foundation is to “Continue the work begun by Marco Simoncelli  to promote the development, autonomy, rights of children, youth training and measures in favor of disadvantaged social groups.”

With huge funds raised it can be deemed a resounding success, and hopefully become a annual event to gather these stars and raise money.