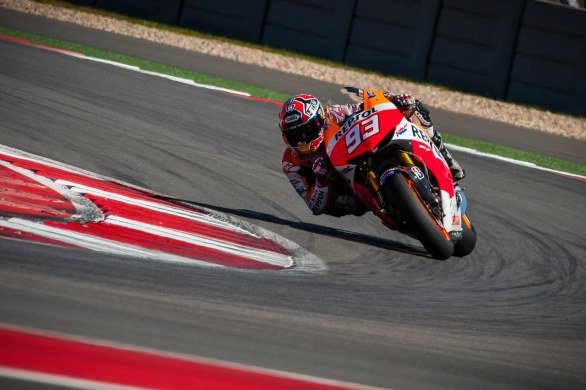 Marc Marquez went fastest once again during the final day of the private Honda test at COTA ahead of next weeks final IRTA test at Jerez.

The Factory Repsol Honda riders, LCR backed Stefan Bradl and wildcard CRT rider Blake Young had the entire Circuit of the Americas to themselves on the third and final day of testing, after the Factory Yamaha Racing duo decided to leave on Wednesday evening.

Once again Marquez, much like days one and two, was the first rider out on track, and he was followed by Stefan Bradl and then his team mate Dani Pedrosa.

By the time Pedrosa had entered the fray Marquez had already posted 25 laps,  and the fastest time of the day, a 2′03.281, which was six tenths faster than the his best lap from day two.

“This final day has been good for me. From the beginning I had the same feeling as yesterday and especially this morning we started to try some technical settings for the first time and we found some big improvements,” said Marquez.

“After lunch we were considering a race simulation but in the end we spent the time working with the electronics. It’s been important to come and test here as we will be here for the second race.

“It’s quite a physical track -especially the first sector- but in the end, we now know the track a little and we have a good base for when we come here for the GP.”

Team mate Dani Pedrosa completed a hat-trick of seconds, but he finished the day more than half a second adrift of his team mate. Despite finishing second, his day was brought to an abrupt ending because of sore neck and after just 24 laps.

“After the first exit this morning I had a pain in my neck, I’m not sure what caused it but it affected my riding so I decided not to do so many laps today,” said Pedrosa.

“Everything has gone well though in general, we had three positive days and I’m happy we came here, because we were able to put in many laps of this circuit which is very tricky and difficult.

“There are some heavy braking points and some blind corners, so it was important to test here to find the references. We weren’t able to try much in terms of settings, because we didn’t know the track and the surface wasn’t 100% with so few riders here, but we’ve been improving.

“We only tried the soft compound tyre, but in general the feeling is positive. I’d like to thank Honda for making the effort to come here, it has been valuable and I am very grateful!”

LCR’s Stefan Bradl was third fastest, and a little over a second from his former Moto2 rival, and he too decided to quit an hour before the afternoon session ended. The German completed a total 43 laps, leaving the whole circuit to Marquez for the final hour, who was lapping right until the chequered flag came out.

“Overnight my left hand started to ache and this morning it was oddly swollen. For this reason I was not able to be very aggressive on the bike (especially on hard breakings and left corners) and we decided to cancel the afternoon race simulation.

“However we improved some areas like the breaking stability and we tried different hard tyres both rear and front gathering more data for the race weekend.

“Overall it was a useful test for us because we had the first approach with this new track and we gained more track time before the start of the season”, said Stefan Bradl.