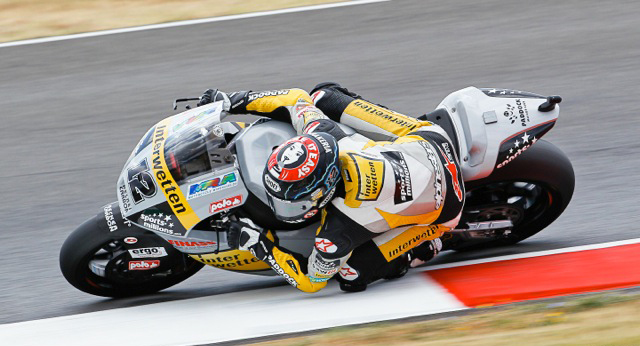 Tom Lüthi has suffered multiple  and complicated fractures in his left upper arm, elbow and shoulder during day 2 at Valencia.

Lüthi was the hapless victim when Gresini rider Ratthapark Wilairot crashed during the final day of Moto2 testing at Valencia wiping out the Interwetten rider.

He was initially treated in the Clinica Mobile at the track, before being taken to the Valencia 9 d’Octubre Hospital, where he was stabilized, before being flown to Bern later that evening to undergo surgery at the Münsingen hospital.

Dr. Marc Metzler, performed the surgery, and the operation took five hours to repair the multiple fractures in his elbow and arm with plates and screws.

Following the procedure Dr. Mettler confirmed, “The operation was a success. Tom can expect a full recovery without any restrictions to his mobility.”

It is unknown whether Luthi will be in Qatar for the season opener in just under seven weeks time, although he will defiantly miss the second Moto2 test this week in Jerez.

“But the initial report of the doctors after surgery took a big weight of our shoulders since Tom will, in all likelihood, recover completely from his injuries. At the moment, this is all that counts!”